Zeldapedia
Register
Don't have an account?
Sign In
Advertisement
in: Articles with non-canonical information, The Legend of Zelda: Four Swords Adventures bosses
English

Stone Arrghus (ワート, Wāto?, Wart) is the boss of Eastern Hyrule, the second level in The Legend of Zelda: Four Swords Adventures. It is the guardian of the Yellow Maiden. Stone Arrghus resembles a spherical stone eyeball; continuously encircling it are many small rocks that guard it against attacks.

To attack, Stone Arrghus flies around the room and spins the small stones surrounding it. To defeat Stone Arrghus, Link must first fall down one of the holes in the ground to obtain the Boomerang. The Boomerang can be used to pull the stones away from the central eyeball, leaving them vulnerable to sword attacks. If there are multiple human players, some of the stones will be color-coded to match the colors of the human-controlled Links. Only the corresponding Link can pull these stones away from the central eyeball.

Once all the small rocks have been destroyed, the central eye becomes bloodshot and vulnerable, causing it to jump up and slam down, sending out shockwaves. If Link is too close, he is stunned temporarily. Stone Arrghus will then move about the room diagonally, until it is struck by Link's sword. Once it has sustained enough damage, Stone Arrghus explodes, leaving behind Force Gems. After Link breaks the barrier in the next room, the second maiden, the Yellow Maiden, is freed. 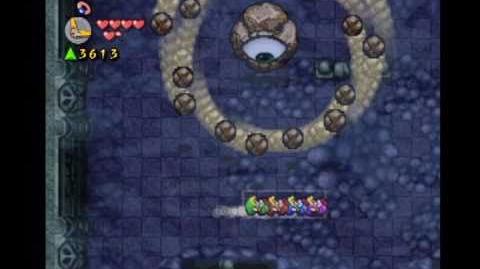 Stone Arrghus' gender, being female, is disclosed. She is encountered in the Dark World equivalent of the Village of the Blue Maiden, the very area where the Links first fought together in the manga. The Links destroy the smaller rocks surrounding Stone Arrghus, later revealed to be her "babies", then shoot her in the eye with the Bow, stunning her. After the Blue Link smashes Stone Arrghus with the Magic Hammer, she gets destroyed and makes Force gems fall.

Stone Arrghus' name is likely derived from Arrghus, a boss from The Legend of Zelda: A Link to the Past with a very similar appearance and battle strategy, who is in turn likely named after Argus, a hundred-eyed giant from Greek mythology.