"What a greedy fool! You want more power?! A buffoon like you might as well give up and go home!"
— Stone Hinox

Stone Hinox, also known as Dekudon, is a mini-boss from The Legend of Zelda: Link's Awakening. It is encountered within the Color Dungeon, a dungeon that appears in only the DX re-make of the game. It is similar to the Hinox mini-bosses in the game, but is stronger and has more attacks. It jumps to cause boulders to fall down, and at the same time stuns Link if he remains on the ground.

Stone Hinox can be defeated using tactics similar to those used in the Hinox mini-boss battles. Link can effectively take it down by dodging its falling rocks attack and bombarding it with Spin Attacks. Link can also jump with the Roc's Feather to prevent himself from being stunned. 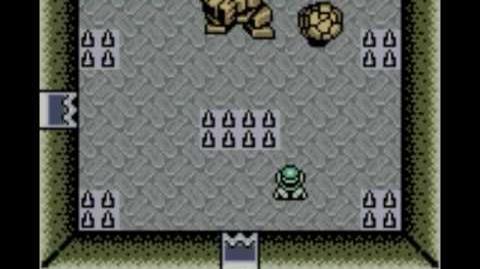 Retrieved from "https://zelda-archive.fandom.com/wiki/Stone_Hinox?oldid=445664"
Community content is available under CC-BY-SA unless otherwise noted.