"A magical tool created by sorceresses of old. Use the Strong Attack button to summon a monster, and then do a Combo Attack with the same monster for an extra-powerful strike!"
— In-game description

The Summoning Gate is an alternate weapon moveset used by Lana in Hyrule Warriors and Hyrule Warriors Legends. With it, she can summon slightly smaller version of boss monsters as well as Cuccos and a Giant Cucco to attack enemies. She can also use it to teleport herself to a different spot, or simply to slash at enemies.

Lana can manipulate the gate via finger/hand movements, gestures, and dancing. Interesting, Lana will hum the Legend of Zelda Theme while she dances.

The key to the Summoning Gate's effectiveness is its Strong Attack, which allows Lana to summon a random boss for a short assault. Each summon gives Lana a different colored aura - if she performs the combo finisher that summons the same boss while the aura is active, she can extend the finisher into a different, more powerful attack. This "enhanced" finisher also surrounds Lana with a barrier, making her invulnerable for most of the attack.

The Summoning Gate victory cutscene features Lana watching as a Cucco comes out of the gate, followed by a second. Before she knows it the gate summons more cuccos causing Lana to flee in panic.

Lana's counterpart, Cia, can also create Summoning Gates with her Scepter in order to summon Dark Links, although her summoning gates can only manifest temporarily. She also uses the Gate of Souls to summon monsters in the main story and the Gate of Time from Skyward Sword appears inside a keep in the Sealed Temple section of the Sealed Grounds stage.

In the original Wii U version, Lana's attacks are her summoning monsters like Argorok and Gohma. But in the 3DS remake, Hyrule Warriors Legends, Lana's moveset is changed from summoning monsters to creating colorful orbs to do the exact same combo attacks as the monsters. 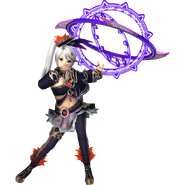