Zeldapedia
Register
Don't have an account?
Sign In
Advertisement
in: The Legend of Zelda: Oracle of Ages locations
English

Talus Peaks is a location from The Legend of Zelda: Oracle of Ages. They make up the most northwest region of Labrynna. Symmetry City can be found to the northeast, Nuun Highlands and Ambi's Palace can be found farther east, and the Fairies' Woods and Deku Forest make up the southern border.

Link must climb the Restoration Wall in the Past in order to meet Patch who can restore the broken Tuni Nut that Link obtained in Symmetry Village. Link can later return with the Broken Sword which Patch can fix making it either the Noble Sword or the Master Sword.

In the Past, if Link talks to Tokkey, he will be taught the Tune of Currents, allowing him to return to the Present at any time without a time portal. Tokkey can be found by navigating the underwater tunnel in Talus Lake at Coordinate B,1. 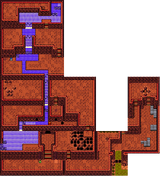 Talus Peaks in the past