Zeldapedia
Register
Don't have an account?
Sign In
Advertisement
in: Articles with non-canonical information, The Legend of Zelda enemies, Zelda II: The Adventure of Link enemies,
and 15 more
English

"Appears on Mount Crenel, etc. They move by jumping long distances. Their movement can be unpredictable, so attack them when they are still."
— Figurine description

Tektites (テクタイト, Tekutaito?) are recurring enemies in the Legend of Zelda series. These spider-like enemies frequently appear in Zelda games. Although their habitat changes from game to game, all Tektites attack by jumping towards Link and slamming into him. While they are rarely a threat, their dexterity can make them difficult to defeat. A prevalent habitat for Tektites are mountainous areas, and they are found near these areas in several games in the series.

Tektites, jumping randomly across the screen, appear in the Overworld. They come in red and blue varieties. Tektites are the only monsters in The Legend of Zelda to subvert the standard that the blue version is tougher. Both red and blue Tektites can be defeated with a single hit from the Wooden Sword, but blue ones are much more prone to dropping Rupees. They are most commonly found on or near Death Mountain and in the rocky terrain near the eastern coastline.

Though most Tektites will jump out of the way of a regular sword attack, none of them are capable of comprehending a beam attack and are thus easily defeated in this manner. They are also easily stunned with the Magical Boomerang.

Tektites only come in blue, and they are far stronger than Tektites in other games generally are. They are heavily armored and can only be damaged with the Fire Spell or the Thunder Spell. They bob up and down while sitting in place, and take huge leaps towards Link. These Tektites also shoot beams at Link.

Tektites live in the mountain range in northern Hyrule. They come in blue and red versions, with the red ones being both faster and more durable than the blue ones. These Tektites are more like the ones found in The Legend of Zelda, but they are more aware of Link's sword and will leap backwards to dodge whenever he strikes with it. Sword beams are also completely ineffective against these Tektites.

Tektites appear mostly in the Tal Tal Mountain Range and northern Koholint Island. In this game, their appearance is changed to a small, featureless central body with squared legs.

Tektites again appear in blue and red varieties. Red Tektites live on the trail leading up to Death Mountain. Blue Tektites are far more common, appearing in one hole in Hyrule Field, Lake Hylia, Zora's River, and the Water Temple. They can also float on top of water. Both red and blue Tektites have the same attack power, but the blue are twice as durable as the red. Both types of Tektites can be stunned by both the Hookshot and Longshot and can be flipped over by the shock waves from the Megaton Hammer. Interestingly, Tektites are completely immune to Din's Fire.

Blue Tektites, who appear in Great Bay Temple and Mountain Village, are identical to the ones in Ocarina of Time, but red ones do not appear. Though Ice Arrows can freeze them, Blue Tektites will not take extra damage from them, only receiving the damage of a regular arrow. They can be flipped over by Goron Link's pound attack.

In the greater Snowhead area, Blue Tektites are sometimes found digging under the snow and will pop out when Link approaches. They can also be found in some large snowballs, and will attack Link if he breaks the snowball. When standing on ice, they will not attack by jumping at Link, but instead begin spinning and slide towards him, sliding out of control and ricocheting off walls if they miss.

Tektites in these games have the same appearance as the Tektites from Link's Awakening, but come in red and blue versions. The blue ones are somewhat more durable than the red Tektites.

Tektites look radically different from their predecessors, having a pointed gray body. They spawn randomly in Death Mountain and persistently try to damage the four Links. Their epidermis is white with a red spot on the top horn.

Tektites can be found on Death Mountain, in the Desert of Doubt, and in the Realm of the Heavens. There are red and blue Tektites in this game, with the blue variety being more nimble and powerful than the red variety. They can be defeated with a few sword strikes.

Tektites are found in mountainous areas. They are identical in appearance to their counterparts from Four Swords. As opposed to earlier incarnations of Tektites, red and blue Tektites are defined by the point at the top of their head; red Tektites are slower and weaker, while blue Tektites require more strikes to defeat and move much faster. Golden Tektites are also found through Kinstone fusion; they are extremely fast and powerful, requiring very many hits to defeat. When they are defeated, similarly to other golden monsters, they normally drop 100 Rupees. 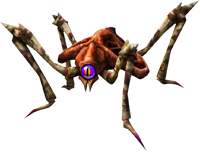 Tektites again appear in red and blue variations, with the red ones inhabiting the mountain trails and the blue ones inhabiting watery areas and Lakebed Temple. Both variations also appear in the Cave of Ordeals, and in the Goron Mines. There is no difference in the attack power or the durability of the two different kinds of Tektites. The uncanny agility of Tektites allows them to easily attack and possibly dislodge Link from horseback, even if he travels at top speed. If shot in the eye with an arrow, small amount of blood will spurt upon death.

Tektites appear on the big volcano at the center of the Isle of Ember. Once again, they appear in blue and red versions, the latter being the faster and more powerful variety. Tektites also appear in Doylan's pyramid.

Tektites appear in various tunnels throughout New Hyrule and crawl along the walls and ceiling, then jump at the Spirit Train, attempting to smash it. They also accompany a Rocktite during a particular battle and appear to be smaller versions of Rocktites.

Tektites are set to appear as enemies in Tri Force Heroes.

Artwork of a Tektite from The Legend of Zelda

A Red Tektite from Ocarina of Time