Zeldapedia
Register
Don't have an account?
Sign In
Advertisement
in: Temples, The Legend of Zelda: The Minish Cap dungeons
English

The Temple of Droplets is the fourth dungeon from The Legend of Zelda: The Minish Cap. A Minish-sized temple, it is where the Water Element is hidden. The mini-boss is the Big Blue ChuChu. The final boss, Big Octorok, must be defeated with the Flame Lantern, which is the main item in the dungeon. The dungeon contains many ice-related puzzles that require the Flame Lantern to solve. Unlike most other dungeons, the Boss Key does not lead to the boss room - instead, Link must complete another section of the dungeon in order to defrost the element and the boss. Interestingly enough, the Temple of Droplets is the only dungeon in The Legend of Zelda: The Minish Cap that does not contain a Piece of Heart in its interior, excluding Dark Hyrule Castle.

The dungeon consists of many rooms with an icy or watery terrain, and also require the manipulation of Sunlight to complete. Link is required to pull two specific levers that cause Sunlight to flood into the room via the roof to unfreeze an ice block. Encased in the ice block is the Water Element, as well as the dungeon's boss, the Big Octorok. The boss eats the Water Element before Link is able to retrieve it; to gain possession of the Element, Link must defeat the Big Octorok. 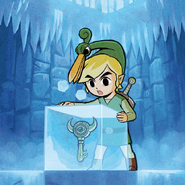 Artwork of Link and Ezlo with the Boss Key encased in an Ice Block
Español
Community content is available under CC-BY-SA unless otherwise noted.
Advertisement