"Do you understand what you're asking? We're pirates! You know... PIRATES! The terror of the seas! What do we get out of bringing some helpless kid along with us? I'll tell you what we get... a headache. I know how you must feel, with your sister having been kidnapped and all... But that doesn't have anything to do with us, now does it?"
— Tetra

Tetra (テトラ, Tetora?), also known as Dazel, is a recurring character in the Legend of Zelda series. Tetra is a tan, blond pirate girl and successor to her mother's gang of pirates. A fearless and even merciless pirate, she seems, at first glance, cold and to care only about herself and treasure, but in reality is quite kind and caring for others. Despite being younger than her crew members, Tetra is still well-respected among them. She is often recognized by her signature pose, crossing her arms and winking.

At the beginning of the game, Link finds Tetra in the Forest of Fairies, located on top of a mountain towards the back of Outset Island, after she is dropped there by the Helmaroc King. However, shortly thereafter, Link's sister Aryll is kidnapped by the same bird, which mistakes her for Tetra. While Tetra initially shows distrust for Link, she allows him to travel with her on her pirate ship, so Link can reach the Forsaken Fortress and attempt to rescue Aryll. After some time, Link and the pirates make it to the Forsaken Fortress, which Link is catapulted into. After the pirates witness him being thrown from the fortress by the Helmaroc King, however, they leave him behind.

Later Tetra and her crew meet Quill, the Rito postman, and learn that Link is alive. They also hear of a great treasure in Jabun's cavern, found behind Outset Island. In order to gain access to the cavern, Tetra and the pirates travel to Windfall Island to obtain Bombs. The owner of the Bomb Shop, Cannon, tries to overcharge the pirates, which prompts them to take the bombs by force. As they do this, Link also sneaks into the shop. Tetra spots Link, but she keeps his presence a secret from the other pirates. Tetra reluctantly agrees to allow the pirates to stay at Windfall until morning. While the pirates are at the Cafe Bar, Link sneaks into the Pirate Ship and obtains some bombs from Niko, the pirate guarding the ship. Tetra overhears the exchange using the Pirate's Charm she gave Link upon their first meeting. She allows Link to keep the bombs as she is confident the pirates will reach Outset Island first even if Link gets a head start. However, due to the Endless Night, the pirates only leave Windfall when Link reaches Jabun's cavern.

Afterwards, Link attempts to rescue his sister from the Forsaken Fortress again. Unbeknownst to Link, Tetra and her crew also travel to the Forsaken Fortress at the same time. The pirates distract the Helmaroc King so as to buy Link enough time to get to the holding tower where Aryll and the two other maidens were held prisoner; after he arrives, Tetra also enters the tower. Tetra is about to chastise Link for his recklessness when she notices that he has the Master Sword and expresses her shock that he does. She also returns Aryll to Outset Island free of charge, as she feels it is her treat to Link, although she does vow that she will return for Link before leaving him to defeat the Helmaroc King once and for all. Afterwards, Tetra makes good on her promise and attempts to attack Ganondorf in order to save Link after his attack on Ganondorf fails, which results in her true identity being exposed to him when her necklace resonates with Ganondorf's Triforce of Power. Link and Tetra are then rescued by Valoo, Quill, and Prince Komali, who take them to the Tower of the Gods, after which Link and Tetra descend to Hyrule Castle.

There, Tetra is revealed to be a descendant of Princess Zelda in the line of the ancient Hyrulean Royal Family when the King, Daphnes Nohansen Hyrule, gives her the rest of the Triforce. In the final battle, she helps Link defeat Ganondorf by shooting Light Arrows in various manners. At one point in the battle, Ganondorf hits her and knocks her out for around two minutes. When she regains consciousness, she again helps Link defeat Ganondorf by firing Light Arrows at Link's shield to hit Ganondorf. Shortly after, she and Link embark to find a new land that will be the next Hyrule when ancient Hyrule is flooded.

Tetra appears in Navi Trackers, a mini-game found in the Japanese release of the game. In this game, multiple players, using a combination of the television screen and Game Boy Advances, search for members of Tetra's Pirates to gain stamps from them, as many as possible within a given time limit. All action takes place on the Game Boy Advance used by each player, with the television screen showing a basic map and Tetra narrating the action. Tetra and her pirate crew have full voiceovers in place of text-only dialogue, with Tetra also synthesizing the two-character name that each player inputs at the beginning of the session.

"Oh, so this is your friend! She's looking a bit pale...Oooh... something's not right with this girl!"
— Linebeck

Early on, Tetra boards the mystical Ghost Ship. Suddenly, the Ghost Ship disappears with her still aboard it. Eventually, Link manages to find the Ghost Ship; however, he finds that she has been turned to stone by the monster Bellum. Link keeps her in the hold of the S.S. Linebeck. When Link eventually manages to restore her, she is kidnapped by Bellum, who keeps her in the Ghost Ship. Link chases after the Ghost Ship and eventually manages to defeat Bellum. After peace has been restored, Link and Tetra wake up on the Ghost Ship, having realised that they left the World of the Ocean King, and find the other Pirates. Interestingly, after a scene where Oshus is telling Link his story, it shows Tetra regained the color she lost to being turned to stone, but she still does not move or say anything.

While Tetra does not make a physical appearance, a stained-glass window depicting her can be seen in Hyrule Castle's Throne Room. The Lokomo sage Anjean also speaks of an ancestor of Zelda; a pirate that established the kingdom of New Hyrule. Anjean and Zelda's ancestor, became friends shortly after the pirates' arrival; Anjean entrusted her with the Spirit Flute under the condition that her people protect the land for all time. At the end of the game, when Zelda's spirit attempts to get back in her physical body, she asks for Tetra's blessing.

In the Japanese version, Tetra is directly referred as Princess Zelda's grandmother while the localized versions refers to her as an ancestor. 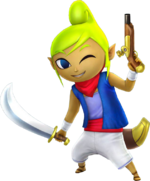 Tetra appears as a playable character in the Nintendo 3DS port of Hyrule Warriors. If the game is synchronized with the Wii U version, she will be playable in the Wii U game as well. She wields a Cutlass and magic-infused Pistol which is in keeping with her occupation as a swashbuckling pirate. Interestingly, Tetra can perform the Spin Attack with her Cutlass as part of her moveset, making her the first incarnation of Zelda known to be capable of performing the technique. 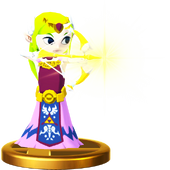 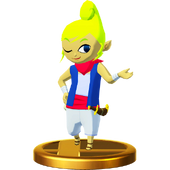 "Tetra" is similar to the Latin word "terra," meaning "land", and could possibly be a tongue-in-cheek reference to the lack of land in the worlds in which the events of The Wind Waker and Phantom Hourglass take place. Tetra is also a genus of tropical fish. Tetra might also refer to the numerical prefix meaning four. Tetra may also be a pun of the word Tetrahedron as the symbol of the Triforce is the net of a tetrahedron.

"Dazel", Tetra's name in certain releases of the game, is simply an anagram of the name "Zelda", thus providing those who play that version of the game with more, albeit less subtle, foreshadowing of Tetra's true identity and lineage.

Artwork of Tetra from The Wind Waker

Artwork of Tetra from The Wind Waker HD

Artwork of Tetra wielding her dagger from The Wind Waker HD