"With a portal to the Era of the Great Sea opened, the captain of the terrors of the sea rushed through and joined the legendary hero in his cause. Despite her relatively young age, Tetra is already an accomplished and fearsome pirate captain, regularly leading a crew of six into and out of certain danger. She carries a cutlass in one hand and a magic-infused pistol in the other, making her deadly both up close and from afar. No one disrespects a pirate!"
— Tetra, the Pirate Leader Historical Entry Tutorial Bio

) is a playable character from Hyrule Warriors and Hyrule Warriors Legends. Captain of Tetra's Pirates in the Era of the Great Sea, Tetra finds herself transported to Hyrule in an alternate timeline due to the warping of time and space.

Similar to her incarnation in The Wind Waker, Tetra prefers to use her wits and has some disdain towards people recklessly going ahead, although she is fiercely loyal to her allies.

In Hyrule Warriors Legends, after the defeat of Ganon, Phantom Ganon steals the Triforce of Power from Lana and uses it to warp time and space, causing islands and the places from the Era of the Great Sea to appear in Hyrule. As a result of the warping of space and time, Tetra and King Daphnes find themselves in an alternate timeline version of Hyrule.

On Windfall Island, Tetra walks on to a bluff and is surprised to find that she has been separated from her crew. She ends up fighting monsters in a merged version of the Forsaken Fortress (which had merged with Dragon Roost Island, Star Island, and Windfall Island). Fortunately, the incarnation of Link from the Era she had found herself in had been sent by Impa and Zelda to investigate the disturbance. She and Link decide to join together to defeat the Monster Forces lead by Boss Blin. When Boss Blin and his forces drive the Helmaroc Kingn from the fortress, Tetra and Link engage in battle with the monsters. After defeating Gohma, Link notices Tetra in the talons of the Helmaroc King, and races off to save his new ally.

The Search for Cia 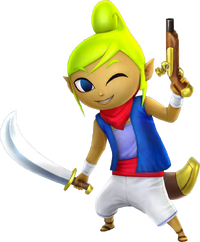 Raised by her pirate captain mother and her crew, Tetra is a skilled seafarer and pirate. Having taken over as leader of the crew after her late mother's passing, Tetra is a capable captain and leader, despite her youth. As a swashbuckling pirate, Tetra fights primarily with Cutlasses and magically-infused pistols capable of firing bullets made of water. She is a talented gunslinger, to the point she can spin a pistol around with her finger. A skilled swordswoman as well, she can even perform the Spin Attack.

Like her ancestors, Tetra is also a capable magic user and archer. In addition to her mother's necklace, eventually revealed to be a piece of the Triforce of Wisdom, Tetra also possesses an enhanced version of a Gossip Stone known as the Pirate's Charm, which she uses to communicate with Toon Link.

Dark Tetra is a shadowy doppelgänger of Tetra that appears as an enemy in Adventure Mode. She uses the same moveset and drops the same Materials as Tetra.

Tetra in her battle intro cutscene