The Imprisoned (封印されしもの, Fūinsareshi Mono?, The Sealed One) is a character from The Legend of Zelda: Skyward Sword. It is a giant, mysterious beast who haunts Link's dreams. The Imprisoned dwells within the Sealed Grounds, and Link must fight it on several occasions throughout his quest, with the monster gaining a new attribute or ability each time.

After his failed attempt to obtain the Triforce, Demise was transformed into the Imprisoned by the goddess Hylia and trapped within the Sealed Grounds. In the present day, Demise's servant, Ghirahim, seeks to break the seal on his master and return him to his original form by using the soul of Zelda, the Hylian reincarnation of Hylia.

During Link's first visit to the Sealed Temple, the Imprisoned's seal is weakened to the point that it attempts to escape and destroy the temple, but with the help of the Old Woman, Link manages to re-seal it. The Imprisoned eventually manages to fully break free of its seal on three occasions; first when Link goes to the Sealed Temple with Groose, again just before Link activates the Gate of Time, and once more when Link goes to Faron Woods to learn Faron's part to the "Song of the Hero". Each time, Link manages to defeat it and restore the seal temporarily; however, the Old Woman realizes that the beast is breaking free more quickly each time, indicating that Demise is regaining his strength.

Later, when Link obtains the Triforce, he and Fi use it to wish for Demise's destruction; in accordance with this wish, the Isle of the Goddess detaches from Skyloft and plummets back to the Surface, crushing the Imprisoned beneath it just as it was breaking free of its seal for a fourth time. Unfortunately, Ghirahim circumvents this by kidnapping Zelda and traveling back in time to resurrect Demise. Despite Link's best efforts to stop him, Ghirahim completes the rite; the Imprisoned emerges from its seal and devours Zelda's soul, allowing Demise to return.

The Imprisoned is far too powerful to destroy at this point of the story; even the Goddess Hylia could not defeat it. Instead, Link must attack the sealing spike on the monster's head, re-imprisoning him in the Sealed Grounds. Each time the Imprisoned breaks free he becomes stronger, getting closer to fully escaping each time. After damaging the monster by pounding in the sealing spike three times, the Imprisoned will be forced back into the ground, allowing Link to restore the seal with a Skyward Strike.

To gain access to the sealing spike, Link must use one of two strategies. He can destroy all eight of the Imprisoned's toes to topple the monster and expose the spike, or use the updrafts around the pit to reach a position above the beast and jump onto its head where the seal is located. In either case, the Imprisoned must be defeated quickly; if it reaches the top of the pit and gets to the Sealed Temple, the Old Woman will say "It is too late! All... All is lost," as the Imprisoned roars at her, moving in to devour her. After this, the screen fades to black and Link will receive an instant Game Over.

In the first battle, the Imprisoned simply lumbers around the spiral path to emerge from the pit, ignoring Link almost entirely. It can create a damaging shockwave by stomping its foot on the ground, but Link can avoid the attack by backing away when the Imprisoned's scales glow red - the attack is obviously telegraphed and easily allows for focus on the other foot. After taking damage from the sealing spike, it briefly becomes invincible and slithers on its belly to cover some ground, damaging Link if he is in the way. When it nears defeat, it begins creating shockwaves with every step, forcing Link to time his attacks on the feet or necessitating the use of the second method of attack.

In the second match, the Imprisoned is faster than before and begins generating shockwaves right from the start. Its new arms allow it to scale the side of the pit, and allow it to cover distance more effectively. The arms block Link's path to the sealing spike if the toes are destroyed, forcing him to use the updrafts. Additionally, it will try to shake Link off its head by quickly tipping its head back.

The Groosenator's bombs can stun the Imprisoned, knocking it off the wall if it is climbing and staggering it if it is walking. Either way, it is immobilized, leaving the toes and the sealing spike as easy targets. However, Link should not to stand on the tracks even if The Imprisoned is on the path below them as the Groosenator may suddenly move at speed and knock Link off of the tracks. The bombs can also destroy the toes, should Link miss. While waiting for Groose to ready the Groosenator for the next shot, Link can circumvent the foot-based shockwaves using his Bow to hit the Imprisoned's toes.

The Imprisoned's new tail seems mostly cosmetic, although it can knock Link back when he is trying to catch up with the monster, and, if the toes are destroyed, stop Link getting to the sealing spike as quickly. The Imprisoned gains yet another speed boost for its third attack on the Sealed Temple, near-constantly surrounding its feet with shockwaves - which are near twice the size of those produced in the other battles - and throwing Link off almost immediately if he tries to jump on its head.

At this point, attacking it directly is nearly impossible unless it is stunned by the Groosenator first. If a bomb is missed or Link needs to speed things up or conserve health, he can again circumvent the Imprisoned and its shockwaves by using updrafts to get ahead of it, then fire his Bow at its toes. After taking a hit, it will manifest a halo-like ring on its back and begin floating out of the pit. Groose must then fire a bomb from the Groosenator to cause it to collapse, giving Link an opportunity to attack the sealing spike again. Alternatively, Link can wait until the last moment - a powerful updraft will appear at the very bottom of the pit, which will launch him high enough to land onto the monster. Either way, Link must again strike the sealing spike to damage and ground the Imprisoned again.

Unfortunately, the Imprisoned's fall also causes part of the temple to collapse, blocking off Groose's supply of bombs and preventing him from repeating his strategy. As the monster begins to rise once more, Link must quickly ascend to the top of the pit using updrafts and meet up with Groose, who decides that the only way to save the temple now is to launch Link himself onto the Imprisoned's head. Groose must take careful aim with the Groosenator as the enemy rises into view and fire Link right next to the sealing spike - alternately, Link can use the updraft at the bottom of the pit when it appears. However Link gets on the Imprisoned's head, he must attack the sealing spike one last time to defeat it once again.

The Imprisoned appears as a boss in the spinoff game Hyrule Warriors and Hyrule Warriors Legends. It is the boss of the Sealed Grounds. When summoned during the story, Ghirahim refers to it as his true master - however, its nature as Demise's sealed form is only revealed in its unlockable profile.

After Link manages to foil Ghirahim's attempt to turn part of the Hyrulean Army against itself, the Demon Lord uses the Sealed Grounds' Gate of Souls to summon The Imprisoned to deal with the remaining Hyrulean forces. The heroes must defeat the beast before they can finally deal with Ghirahim.

The Imprisoned behaves similarly to its appearance in Skyward Sword, slowly stomping forward and creating damaging shockwaves with every step. Link must destroy the beast's toes to knock it down, leaving its weak point open for attack. In addition to its shockwaves, The Imprisoned can attack by lying on its belly and sliding forward while snapping its jaws, charging up dark energy to strike all nearby enemies with lightning, or releasing powerful shockwaves from its body (which also regenerates any lost toes).

In its Story Mode battle, The Imprisoned will attempt to destroy the two Cannon Keeps. When it reaches one of the keeps, it will begin flying and charging a powerful attack - Link must secure the keep before using its Groosenator catapult to knock The Imprisoned out of the sky.

In Cia's Tale, the Imprisoned also proceeded to attack Skyloft under Ghirahim's command. It ultimately fell at the hands of Cia's forces, who had allied with the Skyloft soldiers specifically in order to recruit Ghirahim, with Ghirahim ultimately submitting to Cia, although solely because he sensed a similar energy to that of his master Demise inside of her.

Outside of Story Mode, certain scenarios feature smaller versions of The Imprisoned as unique enemies. Despite being smaller and weaker than the original, the Mini-Imprisoned lack the weakness of the original (as its toes are smaller) and have a new attack where they fire a beam of dark energy from their mouths; their Weak Point gauge becomes visible after doing so, making them susceptible to a Weak Point Smash.

The Imprisoned appears as a Trophy that is part of the Skyward Sword Trophy Box. The Trophy depicts its third form.

Concept Artwork of The Imprisoned's 1st form from Skyward Sword

Concept Artwork of The Imprisoned's 3rd form from Skyward Sword

Concept Artwork of The Imprisoned's flying form from Skyward Sword 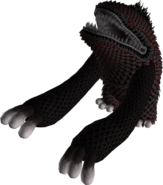 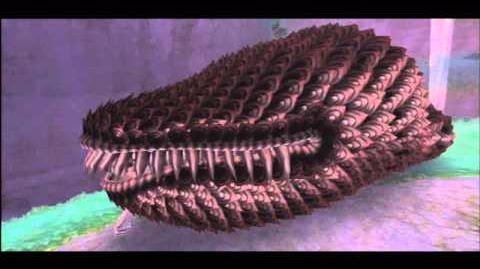 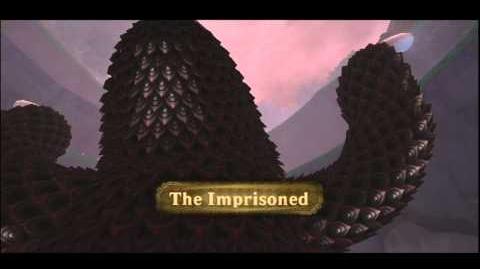 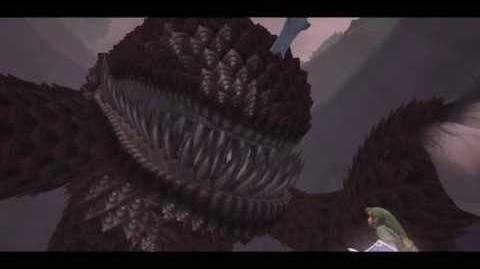