Zeldapedia
Register
Don't have an account?
Sign In
Advertisement
in: Games, The Legend of Zelda: A Link Between Worlds
English

Usage of most items is no longer unlimited; they are tied to the Energy Gauge, which appears as a purple meter in the interface, sharing similarities with the Magic Meter and the Stamina Gauge from earlier titles. Each action depletes a certain amount of energy from the gauge, and depleted energy requires a period of inactivity to recharge. As a trade-off, items such as the bow and bombs can be used indefinitely without gathering more ammunition.

Another new gameplay innovation is "merging", which allows Link to flatten himself against walls, essentially rendering him a two-dimensional character. This allows him to move along walls to reach areas he would otherwise not have access to. Performing this action continually depletes the Energy Gauge for as long as Link remains in this state. Merging is required in order to travel between Hyrule and Lorule, Hyrule's dark counterpart world, a game mechanic very similar to the Dark World from A Link to the Past; indeed, Lorule is itself largely similar to the Dark World, with the same or similar enemies, locations, etc.

The game also re-introduces a level of non-linearity not seen since the original The Legend of Zelda; after a certain point has been reached, dungeons may be completed in any order, provided that Link rent or purchase the item required to enter the dungeon itself, which is also bound to require usage of said item to complete.

As a 3DS title, the game also makes use of StreetPass. A profile may be created for each user, drawing its statistics such as Heart Containers and items from the player's inventory. When another person's StreetPass profile is detected by a 3DS console, it appears in their game as a Shadow Link. This Shadow Link, controlled by the CPU, can be fought and defeated to earn a bounty of Rupees determined by their items and stats, and complete certain Challenges, such as defeating a Shadow Link with a specific item, or winning without sustaining damage.

The events of A Link Between Worlds take place six generations after the events of A Link to the Past. The legend of the legendary hero's battles against Ganon has been passed down from generation to generation, and peace has ruled for decades. The game's incarnation of Link is an apprentice blacksmith to Hyrule's greatest Blacksmith.

Beset by a nightmare of the sacred Triforce being destroyed and facing a gargantuan evil creature, Link is awakened from his sleep by Gulley, the Blacksmith's son. Link rushes over to the smithery, where the Captain of Hyrule's knights has stopped by to retrieve his sword and shield. After Link is scolded for being late, the Blacksmith's Wife notices that the Captain forgot to bring his sword along with him when he left. Link is tasked with traveling to Hyrule Castle to return it to its rightful owner. Once Link arrives at the castle however, he is told that the Captain went to the Sanctuary. Upon his arrival there, however, the villain Yuga appears, and turns both Seres and the Captain into paintings with his wicked magic. Link lunges at Yuga, but Yuga is able to use his magic to turn himself into a wall painting, causing Link to crash straight into the wall. Yuga then returns to his original form, kicking Link to the floor in the process. As Yuga leaves with Seres in tow, the Priest says to warn Princess Zelda of this before Link passes out.

Link awakens once more in his house, where he finds himself face to face with a masked figure clad in purple, who introduces himself as Ravio, a traveling merchant. He found Link unconscious in the Sanctuary and brought him back to a vacant house, which unbeknownst to Ravio was indeed Link's own dwelling. After Link explains the situation to Ravio, the mysterious salesman asks to rent his house, as Link barely uses it to begin with. Link eventually agrees, and as thanks, receives a strange bracelet, apparently an heirloom of Ravio's.

At Hyrule Castle, after not initially being taken seriously by the castle guards, Link is granted an audience with Zelda by Impa, the princess' aide, but is told to wait a little while. In the meantime, Link passes the time by gazing upon the paintings in the entrance hall that detail the defeat of Ganon, and the splitting of the Triforce into three separate pieces held by those who most embody their virtues. When Link meets with Zelda, she is shocked to hear of the events that have transpired, and fears that the evil of the past may be re-awakened. To formulate a plan however, Link must meet with Sahasrahla, the elder of Kakariko Village. Before sending him on his way, Zelda presents him with a special charm that she says he will soon need.

Sahasrahla tells Link that the only way to harm Yuga is to use the Master Sword like the legendary hero did before; to get the sword itself, Link must get the Pendants of Virtue that proves his worthiness to carry the blade. Sahasrahla directs Link towards the Eastern Palace, where the first pendant may be found. Unable to make his way into the temple itself however, Link discovers a nearby sign from Ravio, who has opened an item shop in what was formerly Link's residence. As another reward for letting him stay in his house, Ravio gives Link a rental bow which he then uses to access the temple. Therein, he battles Yuga, but is unable to stop him from turning Osfala into a painting. Yuga attempts to stop Link once and for all by turning him into a painting, but Ravio's Bracelet somehow enables him to escape from the wall in which he was imprisoned. He is able to harness this power at will to escape from the palace.

While Link's quest for the pendants continue, more people go missing from Hyrule, including Gulley, and the witch Irene whom Link had befriended earlier. When he retrieves the sword, he is able to access the upper floors of Hyrule Castle where Yuga awaits. After another encounter with Yuga, Link finds a mysterious crack in the wall that leads him to a room identical to Zelda's chamber, but in a state of disrepair, and a dark sky looms outside the window. In a nearby chamber, he watches in horror as Yuga uses the kidnapped people of Hyrule, revealed to be the Seven Sages, to revive the Demon King Ganon, and merge with him. Yuga attempts to attack Link but is stopped by Princess Hilda, who spirits Link away to safety, and informs him that he is now in Lorule, a dark counterpart to Hyrule that shares many geographical similarities. She says that Yuga has imprisoned the Seven Sages--Zelda being safely in Hilda's care--in various dungeons throughout Lorule. Hilda continues to aid Link throughout his quest with advice at several points, and is shown several times talking to Zelda's portrait about the grim history of Lorule.

One by one, Link rescues the Sages, who grant him the Triforce of Courage when all are rescued. With the Triforce, Link is able to re-enter Lorule Castle, where Hilda reveals her true agenda to reunite the Triforce and restore Lorule to its former glory. Lorule once had a Triforce of its own, but in order to prevent war over the sacred wish-granting artifact, the people elected to have it destroyed; unbeknownst to them, however, the Triforce shares a deep connection to Lorule's continued prosperity, causing the country to become gradually ruined and barren. At this very moment, however, she is betrayed by Yuga, who cares not for the restoration of Lorule as it was, but rather seeks to remake it in his own "perfect" image. During the ensuing battle over the Triforce, Zelda grants Link the Light Arrows needed to deal the final blow to Ganon, which Link does by turning Yuga's tricks against him by becoming a painting and firing at the backside of his beastly form.

After the battle, Hilda still refuses to relinquish the Triforce; Ravio suddenly appears on the scene, and takes off his mask to reveal his true identity as Link's Lorule counterpart. He manages to make Hilda see the error of her ways, and convinces her to let Hyrule keep its Triforce, though Lorule is surely doomed. Zelda is sympathetic towards Hilda's plight, and wishes things did not have to be this way. When Link and Zelda make their leave, they find themselves in Hyrule's Sacred Realm, standing right before the reunited Triforce. Both agree to do the right thing, and restore Lorule's Triforce. With both lands now at peace again, Link returns the Master Sword to its resting place. 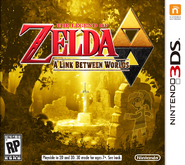 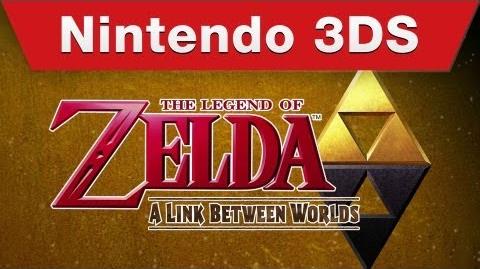