Zeldapedia
Register
Don't have an account?
Sign In
Advertisement
in: Games, The Legend of Zelda: Four Swords
English

"That is the sacred blade I spoke of, the Four Sword. Sealed away in its forged steel is Vaati, the wind mage. Lately I have been sensing weakness in the seal. It worries me. That is why we have come here... Be careful. It is said that the body of one who touches this blade will be shattered to pieces."
— Princess Zelda

The player(s) control up to four differently colored versions of Link, who must work together in order to stop the evil Wind Mage, Vaati, who has taken Princess Zelda captive. The game world is divided into several levels, each with a certain amount of sub-levels. The original version of Four Swords featured some inter-game connection to A Link to the Past in that techniques learned in a save file in A Link to the Past would be unlocked in Four Swords once learned; furthermore, a bonus dungeon not found in the original version of A Link to the Past is unlocked when both games have been completed on the same save file.

According to the game's prologue, the land of Hyrule was once attacked by a wind mage known as Vaati. He raided numerous villages throughout the country and kidnapped any maidens whom he fancied. Vaati then took the captured maidens to his palace. A number of heroes set out to defeat Vaati and to save the maidens, but they all failed, until a young boy appeared from the deep forests of Hyrule and brought an end to Vaati's reign. When asked by the people of Hyrule how the boy came to defeat the powerful Vaati, the maidens informed them of his cursed sword, which allowed him to split into four; their powers combined, they were able to defeat Vaati and seal him inside the blade. Although the people did not believe their story, they were nevertheless intrigued by it, and the boy's sword became known as the "Four Sword." As the legend of the sword and its abilities grew, the people built a sanctuary to protect the blade. 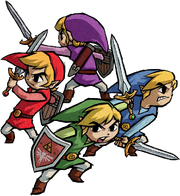 At the game's outset, Princess Zelda senses a disturbance in the seal placed on the Four Sword, and travels with her friend Link to the Four Sword Sanctuary to investigate. Just as Zelda approaches the Four Sword, however, the Four Sword leans out of its pedestal, and the room is enveloped in darkness. Vaati, whose seal had in fact been broken shortly before their arrival, then reveals himself and promptly absconds with the Princess to his palace, planning to make her his bride. Before departing, Vaati renders Link unconscious. When Link regains consciousness, three fairies appear before him. They instruct him to draw the blade out from its pedestal; upon doing so, Link is split into four copies of himself, indistinguishable from one another aside from the color of their clothing.

The original Game Boy Advance version requires at least one other player with a separate console and game cartridge; the game cannot be played unless at least two Game Boy Advance systems are connected via link cable. Each player controls one of the four Links, who all have the same abilities; player one is the green Link, player two is red, player three is blue, and player four is purple. In the Anniversary Edition, multiplayer mode uses the console's wireless local connection instead. This version also includes a single player mode, in which one player controls two Links; one green, and another of the color of their choosing.

The world of Four Swords is divided into five stages. Four of the stages are divided into three levels, of which the first two are randomly chosen from three available ones, and the third is a battle against that stage's boss. At the end of a level is a portal leading to the next one; all players must reach the portal before they can move on to the next level. The first player to reach the portal is rewarded with a Heart Container which expands and restores his life energy.

Throughout Hyrule, the four Links come across Rupees of varying amounts; a certain amount of Rupees is required to complete a stage. If one of the players run out of hearts, they may be revived for the cost of 50 Rupees; however, this price increases by 50 Rupees for each time this is done. The faster a level is completed, the more bonus Rupees they will be given. All Rupees gathered are pooled into the same wallet; if the players do not have enough Rupees to revive a fallen hero, a Game Over will occur, and they will have to restart the level. The player with the most Rupees will get a special prize at the end of the level.

When the boss of a stage has been defeated, the four Links are taken to that specific stage's Great Fairy. If they have gathered enough Rupees, they are granted Silver Keys needed to enter Vaati's Palace. When each player has all three Silver Keys, they can access the palace, which is the game's final stage. The stages are the Sea of Trees, a forest type area with grass and shrubs; Talus Cave, an icy cave with bottomless pits; and Death Mountain, an active volcano full of fire and magma. The Chambers of Insight is an optional tutorial that covers most aspects of the game.

Four Swords Anniversary Edition has been enhanced with a new single-player mode. It also supports local wireless cooperative play for up to four players. There are also two new areas exclusive to this version of the game, each with three levels to complete: the Hero's Trial, which combines challenges from other maps, and upon completion will allow the player to unlock the Hurricane Spin; and the Realm of Memories, which is made up of levels resembling locations from The Legend of Zelda, The Legend of Zelda: Link's Awakening, and The Legend of Zelda: A Link to the Past, and allows the player to unlock the Master Sword which allows Link to do the Sword Beam. 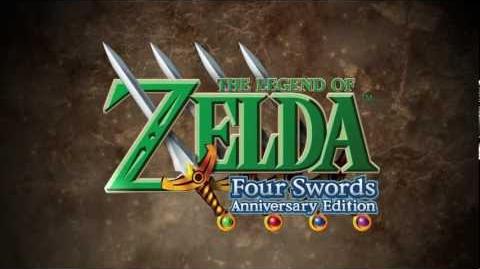 Artwork of the blue version of Link 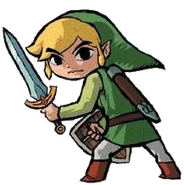 Artwork of the green version of Link

Artwork of the purple version of Link 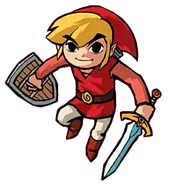 Artwork of the red version of Link