Zeldapedia
Register
Don't have an account?
Sign In
Advertisement
in: Previous featured articles, Articles with non-canonical information, Games, The Legend of Zelda: Oracle of Ages
English

The Legend of Zelda: Oracle of Ages (Japanese title: ゼルダの伝説 ふしぎの木の実 時空の章, Zeruda no Densetsu: Fushigi no Ki no Mi: Jikū no Shō, meaning: The Legend of Zelda: Fruit of the Mysterious Tree: Chapter of Time and Space), together with its counterpart, are the seventh and eighth installments in the Legend of Zelda series, published by Nintendo and developed by Capcom, with Nintendo overseeing development. Although the game was originally released for use on the Nintendo Game Boy Color, it exhibits special features, such as an additional shop, when played on a Nintendo Game Boy Advance.

This game is the counterpart of The Legend of Zelda: Oracle of Seasons, which was released at the same time. These two games have the ability to link with one another, using either passwords or a cable, so that a person could play one game, and then transfer his or her progress to the other game. In addition, this is the only way to reach the "true" ending of the game. The game was originally planned to be a trilogy with The Legend of Zelda: Mystical Seed of Courage known as the "Triforce Trilogy", in which two of the games were to be remakes of the original NES titles. This idea was scrapped relatively late in the development process, and the games were re-branded to remove all mention of this Triforce theme. However, remnants of the original Zelda remake idea exist in Oracle of Seasons, with several bosses from the original game reappearing.

The biggest difference between Seasons and Ages is that each focuses on a different aspect of the classic Zelda formula: Ages is puzzle-heavy while Seasons is action-oriented. Both Seasons and Ages are fully self-contained games that can be played and completed without each other.

Called by the Triforce, Link travels to the shrine of the sacred relic. He is beckoned by the sacred triangles, and they transport him to a world known as Labrynna, which is in dire need of the legendary hero.

Link awakens in a grove. Here, he meets Impa who is on her way to meet Nayru, a beautiful girl with a voice known to all of Labrynna. Impa sees the Mark of a Hero on his left hand, and tells him that the road to Nayru's house is blocked by a stone with a mark of the Triforce on it. Link moves it and the two find the grove where Nayru is singing. However, the pastoral serenity ends when Veran, the Sorceress of Shadow, leaves Impa's body, who she had been possessing all along. Nayru is revealed to be the Oracle of Ages, descendant of a long line of women with the power to control time. She then possesses Nayru's body and uses her power to transport herself to the past.

In the past, Veran, through Nayru, befriends Queen Ambi and becomes her chief advisor. Queen Ambi is in the middle of constructing a tower to guide her lost seafarer back to her. However, through Nayru, Veran twists Queen Ambi's original romantic idea into one of nightmares. Veran is able to stop time, creating a permanent day, thus preventing the workers building the tower from ever going home. Queen Ambi, believing Nayru to be good, pays no heed to the suffering of her people.

Back in the present age, Impa tells Link that in order to find out how to stop Veran, he must consult the Maku Tree. He travels to the place of the Maku Tree; however, something is happening to her in the past and she ceases to exist. Link travels back in time to stop some Moblins and prevent her death from ever happening. After he travels back to the present, the Maku Tree tells him that the only way to break the curse on Ambi's Tower, now known as the Black Tower, is to gather the eight Essences of Time, thus restoring the Maku Tree's memory.

Link starts collecting the Essences of Time. At one point, he decides to rescue Nayru from Veran's spell. However, after driving Veran out of Nayru, Veran possesses Queen Ambi herself. She completes the Black Tower. After Link collects the rest of the Essences, the Maku Tree's memory is restored, and she produces a Maku Seed; a magical seed with the power to break the curse on the Black Tower. Link travels there, breaks the curse and confronts Veran. After multiple hard-fought battles, Veran is finally defeated, and all seems to be well. However, Twinrova had been watching the events that transpired the whole time, and Veran, even though she was defeated, managed to create enough fear and sorrow to light the Flame of Sorrow. Twinrova's plan is to resurrect Ganon once both the Flame of Sorrow and Flame of Destruction are lit. Link is able to defeat Twinrova and Ganon by using the passwords between Oracle of Seasons and Oracle of Ages to unlock another ending. He is later kissed on the cheek by Zelda after completing his mission.

Labrynna is one of the smaller worlds in the Zelda series, even among Game Boy titles. It can be explored twice over by Link, in the past and in the present. Each has subtle changes, much like the Light World and Dark World in The Legend of Zelda: A Link to the Past.

For instance, it appears that the water level has fallen in Labrynna over time, as the coastline at Rolling Ridge in the past has retreated to Yoll Graveyard in the present. It is worth noting that the player cannot travel from present to past (even with the Song of Ages) in Yoll Graveyard and The Black Tower, as this would potentially allow the player to enter the last dungeon out of sequence. Even upon completion of the game, an attempt to warp while in Yoll Graveyard is met with: "You were sent back by a strange force!"

The linked game also has many extras. Some items move around and must be found in different places. Princess Zelda appears and must be rescued. The Oracle of Ages character Queen Ambi appears in the game, and after searching for her long-lost sea-faring lover, finds him in Subrosia. Also, once General Onox is defeated, the witch Twinrova appears. Veran and Onox were ploys to light the Flames of Sorrow and Destruction. Upon kidnapping Princess Zelda, the third Flame of Despair lights, and Twinrova attempts to offer Zelda as a tribute, along with the energy of the Three Flames, to revive Ganon. Link must then enter Twinrova's lair and stop the ritual. Upon completing the linked game, players receive yet another password. When used to start a new game, players receive the Victory Ring, which commemorates their defeat of Ganon.

A manga novelization of the game was made by the manga-ka Akira Himegawa, a sequel to the Oracle of Seasons manga. It introduced plot-lines and story elements that weren't included in the original game, characters like Sir Raven, Link's ancestor who travelled to Labrynna and worked as Queen Ambi's chief guard, as well as a companion in the bumbling Ralph (a young man who assists Link on his quest) and finally Link's grandparents who raised him. It also included the link-up segment of the game, hence Ganon made an appearance. However, unlike the game, Zelda does not kiss Link at the end of the story. 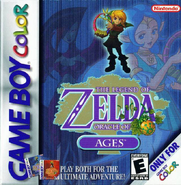 The box art for Oracle of Ages

Title screen for Oracle of Ages