The game's graphical style is nearly identical to that of The Legend of Zelda: Phantom Hourglass, as is the gameplay; the top screen is used as a map screen, and the touch screen serves as the action screen. One of the biggest new additions to the game is travel by railroad. The player is put in control of the Spirit Train that may traverse a whole network of tracks across the game world. The user interface (the placement of which is based on the laterality settings determined by the player) includes a throttle that allows for an increase of speed, driving in reverse, and halting the train entirely, as well as a pull cord for the train whistle, which has various effects if used around certain creatures and objects. The train's cannon can be used to damage enemies and destroy obstacles by tapping them with the stylus. Eventually, players will have to switch between several different tracks. In some areas tracks have other trains on them, and Link must avoid colliding with these trains.

Another new gameplay element is the control of Phantoms, which opens up several new combat and puzzle solving capabilities. On the bottom left corner of the screen is an icon that can be tapped in order to assume control over the Phantom currently escorting Link; in order to control the Phantom, a movement path for it must be drawn with the stylus. If a Phantom is directed towards an enemy, it will attack once within the range of its sword. Phantoms are invulnerable to fire, magma and metal spikes, allowing it to reach that areas Link cannot. Link can also ride on the knight through lava in order to reach platforms and islands surrounded by magma. Several types of Phantoms, all with unique abilities (and limitations), may be used.[3]

The game also involves use of the DS microphone to a greater extent; the item most prevalently requiring the use of the microphone is the Whirlwind; when the player blows into the microphone when Link uses the Whirlwind, it produces a great gust of wind that is able to knock down certain items from areas that Link is normally unable to reach. A secondary usage is its ability to render some enemies unconscious as a result of the powerful wind. Another new item is the Whip, which Link can use to damage enemies and cross gaps in a manner similar to the Grappling Hook, another recurring item in the series.

During an interview with Shigeru Miyamoto at E3 2009, he confirmed that the game would contain a multiplayer mode designed for four players, however, it was only briefly described as being "similar to tag", and swords were mentioned as not being available. 4-Player Battle Mode revolves around collecting Force Gems while dodging enemy attacks as well as the opposing players/team. While swords cannot be used, red Bomb Flowers can be used as a weapon. Unlike its predecessor, none of the multiplayer modes available in Spirit Tracks are compatible with Nintendo WFC.

Spirit Tracks is the direct sequel to Phantom Hourglass in the "Adult Link" Timeline. After defeating Bellum in the World of the Ocean King, Link, Tetra and her band of pirates set out to discover a new Hyrule, after the events of the Great Flood, and eventually they came upon an uninhabited land, christening it New Hyrule and reinstating the Hyrulean monarchy. Thereafter followed an age of peace, in which the Spirits of Good watched over the Hyrulean people. However, this peace came to an end when the evil Demon King, Malladus, appeared, seeking to destroy all the land.

The Spirits of Good came down from the heavens to battle this foe; they were successful in subduing the enemy, but could not destroy him. Instead, Malladus was sealed deep beneath the earth; giant shackles were forged and a huge Tower of Spirits was erected to maintain the seal on Malladus. However, the power of the spirits was depleted during the battle with Malladus, and they ascended to the heavens, leaving New Hyrule, now bereft of spirits and demons, in the hands of the chosen Hyrulean people. As time passed, New Hyrule became a prosperous kingdom, and the chains used to bind Malladus became tracks for a new technological marvel, the train.

The game opens up with a new Link traveling to Hyrule Castle to attend a Graduation Ceremony where the honor of Royal Engineer will be bestowed onto him by Princess Zelda herself. As she rewards Link for his service, she slips him a note, warning of the suspicious Chancellor Cole, and to take a hidden path and meet her in secret. Upon his arrival there, she informs Link about the Spirit Tracks, which have been mysteriously disappearing from the land of New Hyrule. However, she has been confined to her room, and asks Link to escort her out of the castle, which is under heavy guard. Zelda then presents Link with a change of clothing – the Recruit Uniform – which will help Link blend in and trick the similarly dressed guards.

After their success, the two finally make it out of the castle and bump into Alfonzo, the engineer who mentored Link. As Alfonzo was once a soldier, he helps Zelda and Link escape on a train towards the Tower of Spirits, but as they're off to investigate, the tracks start vanishing right out underneath the vehicle. After a spectacular crash they are stopped halfway by Chancellor Cole and his mysterious right-hand man, Byrne. Cole reveals his true appearance - his two demonic horns having been hidden under his pair of hats - as well as his intentions; namely, to free Malladus from the shackles that bound him, and resurrect him using Zelda's body as a vessel. Byrne easily defeats Alfonzo, and captures Zelda; Link attempts to stop him, but is easily knocked out of the way by Byrne. Cole promptly separates Zelda's body from her spirit with a magic spell, rendering it an empty vessel. Link is powerless to stop them as they depart for the Tower of Spirits with Zelda's body in hand, and succumbs to unconsciousness.

When Link awakens, he finds himself in Hyrule Castle. Shortly thereafter, Zelda's spirit appears in the castle, attempting to get the attention of the guards, who are unable to see her. Link follows Zelda's spirit to her quarters, where the princess is shocked to learn that she doesn't have her body, and Link is seemingly the only person able to see her spirit. They decide to seek the aid of the Lokomo sage of the Tower of Spirits. With Zelda's help, Link finds a sword, and is trained in its use by Russell. They meet the sage Anjean in the Tower of Spirits. She informs them of Cole's plans, and tells them that they must restore the Spirit Tracks to maintain the seal on Malladus by finding the Rail Maps and purging the temples of New Hyrule of the evil that inhabits them. Whilst in the Tower of Spirits, attempting to retrieve the first part of the Rail Map, Zelda learns that she is able to inhabit and control the bodies of Phantoms to aid him in his quest.

After reclaiming the last Rail Map, they are confronted by Byrne. Anjean appears in the nick of time, just as Byrne is about to eliminate Link. Anjean explains that he was in fact her former apprentice and a Lokomo who had turned away from his duties. She warps Link and Zelda back to the entrance of the tower to restore the last of the Spirit Tracks while having an apparent battle with her former apprentice. Returning to the Tower after defeating the Fire Temple, they climb the Tower once again, confronting Byrne (who has apparently defeated Anjean). Overpowering him, they find that Cole has finished the process of making Zelda's body a vessel for Malladus. Byrne asks Malladus to grant him the power he always wanted, but Malladus attacks Byrne, nearly killing him, and then leaves with Cole on the Demon Train. Anjean arrives, apparently surviving her battle with Byrne, though she is seriously wounded. She explains that they must seek the Bow of Light, the only known weapon that can harm Malladus, which is in the Sand Temple.

With the newly acquired Bow of Light, Lokomo Sword (given to Link from Anjean) and Compass of Light (to help them find the Demon Train), the duo, along with Anjean and an unconscious Byrne, set out to the Dark Realm to confront Malladus and Cole. Link fires a Light Arrow, purging Malladus from Zelda's body. As Malladus attempts to reenter the vessel, Byrne steps in the way of the magic attack, sacrificing himself for Zelda, allowing her to reclaim her body. With no other body available, Malladus takes residence within Cole's body, transforming him to a giant beast. Link deflects the beast's fireballs long enough for Zelda to use her sacred power to identify its weak spot, which is identified to be his back. While Link distracts Malladus, Zelda fires the bow of light when Malladus's back is turned. With Malladus defeated, Anjean reveals that since the world is now safe, she and the Lokomos, along with Byrne's spirit, can leave the world in the care of Zelda and Link. Depending on Link's choice from before the destruction of Malladus, there are three possible endings.

Spirit Tracks was released in North America on December 7, and in Europe on December 11; in Japan, the game was released on December 29 — marking one of the few times a Legend of Zelda game has been released outside of Japan before it was released in its country of origin. A special stylus for the Nintendo DS, shaped like a feather pen and stored within a Rupee-shaped container, was bundled together with the game or made available separately in certain regions. The feather pen design may have been inspired by the in-game graphic used whenever Link is swallowed by a Like Like, stunned, attacked by a Phantom Eye, or similar situations, when the players must rub the screen to free Link or the cursor used to draw the train's route on the rail maps.

Spirit Tracks has received generally positive reception, holding an average of 86% and 87% from GameRankings and Metacritic, respectively. [4][5] It was noted that Spirit Tracks had improved on all aspects of Phantom Hourglass, although some reviews, such as the one by Offical Nintendo Magazine, gave the game a lower overall score than its predecessor. Most negative criticism of the game was directed at the repetitive train travel. Spirit Tracks received the "Best Handheld Game" award at Gamescom 2009.[6] The game was also selected by IGN as their "Best of Gamescom 2009" winner for the Nintendo DS.[7] Sales worldwide stand at 2.45 million units.[8] 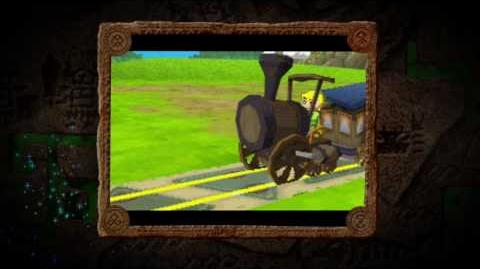 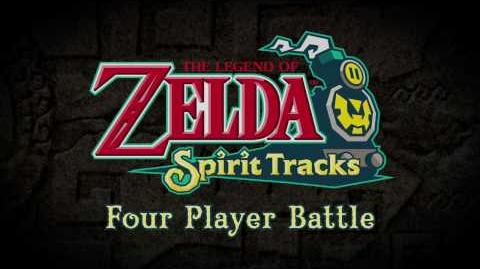 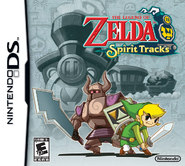 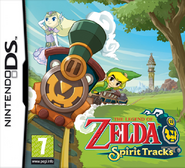 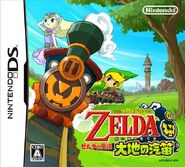 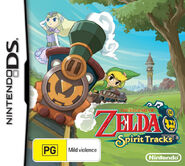