Zeldapedia
Register
Don't have an account?
Sign In
Advertisement
in: Previous featured articles, Games, The Legend of Zelda: The Minish Cap
English

The Minish Cap is the third Zelda game to be released that concerns the legend of the Four Sword, the other games being The Legend of Zelda: Four Swords and The Legend of Zelda: Four Swords Adventures. The game is a prequel to the rest of the Four Swords games and reveals some background information about the games' collective storyline. The game is based around the idea of a magical "cap" or hat, called Ezlo, that Link can use to shrink to the size of the Picori, who refer to themselves as the Minish, a race of thumb size people that live secretly throughout Hyrule.

A long time ago, when Hyrule was about to be consumed by darkness, the tiny Picori descended from the sky, and bestowed upon a young boy dressed in green the legendary Picori Blade and a shining golden light. With wisdom and courage, the young hero drove out the darkness and brought peace to the land. Every 100 years, the gateway between the world of the humans and the Picori opens. The coming of the Picori is celebrated in Hyrule with a large fair and a sword-fighting tournament called the Picori Festival.

On one such day, Hyrule's Princess, Zelda, sneaks out of Hyrule Castle to visit her childhood friend, Link. Link asks permission from his grandfather, the royal blacksmith, Smith. Smith asks Link to bring a sword he created to the King of Hyrule to present to the winner of the tournament. The two go to Hyrule Town to join in the festivities. After partaking in a drawing where Princess Zelda wins a Small Shield which she gives to Link, the two proceed to the castle; however, their path is blocked by a Deku Scrub. Link defeats it and the two continue on, reaching the Castle gardens, where Zelda departs Link and joins Minister Potho and the King to present the winner of the tournament with Smith's sword and allow them to touch the sacred Picori Blade, binding the Bound Chest shut. However, it is revealed that the winner, Vaati, has malicious intent, and breaks the Picori Blade, opening the Bound Chest and flooding Hyrule with monsters. He then turns Princess Zelda to stone and flees the area.

In Hyrule Castle, King Daltus, Smith, Minister Potho, the Vassals, and Link meet to discuss how to revive Zelda; if the Picori Blade were usable, it could break the curse; however, because it is not, other means must be taken to revive her. King Daltus explains that the Picori might be able to fix the blade, but further reveals that they are only visible to children. Smith offers Link to the king, to go and seek them out and is given the Smith's Sword and a Map. The King tells Link he must seek the Picori in the Minish Woods. It is an old belief in Hyrule that the Picori show themselves only to children.

In the Minish Woods, Link encounters a strange being resembling a hat with a bird's head, being attacked by several Octoroks. After saving the creature, it introduces itself as Ezlo. Ezlo explains the situation to him; Ezlo reveals that he, too, is looking to revert a curse done by Vaati, and jumps atop Link's head to accompany him on his quest. Link and Ezlo soon come across a Picori Portal, which they use to shrink to the size of the Picori. Ezlo then explains that while humans refer to them as Picori, the beings refer to themselves as Minish.

In the Minish Village, Link meets the Forest Minish priest Festari, who tells him to eat a Jabber Nut so he can speak the language of the Minish. Link then speaks with the Elder, Gentari. Gentari explains that to repair the Picori Blade, he must find four elemental artifacts and imbue the blade with their essence. He marks the locations of the four Elements on Link's map, and directs Link first to the Deepwood Shrine located behind the village. Link traverses it, defeating the Big Green ChuChu and gaining the Earth Element for his own.

Link returns to Gentari, who directs him to the elder Melari atop Mount Crenel. Link leaves the village, gaining Bombs from a Minish called Belari. Link then continues to Hyrule Town where he learns the Spin Attack from Swiftblade and continues on to Mt. Crenel's Base. Link climbs the large mountain and at the top finds a Picori Portal. Ezlo shrinks the two of them and they enter Melari's Mines. Upon talking to Melari, it is revealed the second Element is in the Cave of Flames, a human mine close to Melari's Mines. Link then gives the Picori Blade to Melari, who begins to fix it, and Link and Ezlo venture through the Cave of Flames, defeating Gleerok, and obtaining the Fire Element.

When he comes back Melari tells him about the Elemental Sanctuary found in Hyrule Castle. Only after he fuses the four Elements into the newly made Picori Blade, known as the White Sword, can he face Vaati and defeat him. Link and Ezlo set off for the sanctuary, where they fuse the Earth and Fire Elements into the White Sword. The two then set off in search of the Wind Element.

It is later revealed that both Ezlo and Vaati were once Minish, Ezlo being a renowned sage and craftsman and Vaati his apprentice. Vaati eventually became corrupted by the madness and egotism of men and took a Magic Cap Ezlo had made for the humans in Hyrule. The hat granted the bearer any wishes, and Vaati chose to become a powerful sorcerer. He then turned his old master, who had tried to stop him, into a hat. Devoured by his desire for power, Vaati took a twisted, vile appearance and set out to search for the mystic Light Force of Hyrule, which would make him even stronger.

Link meets many Town Minish in Hyrule Town and has Rem the shoemaker create Pegasus Boots for him. He then goes to the Castor Wilds, where he obtains a Bow, and proceeds to the Fortress of Winds in the Wind Ruins. However, when he defeats the Wind Element's guardian, Mazaal, he is not rewarded with the Wind Element; a stone tablet is located on a shrine atop the fortress, explaining the Wind Tribe has moved into the sky and taken the Element with them. Link obtains the Ocarina of Wind which allows him to use the bird Zeffa to transport him all around Hyrule.

Link now searches for the Water Element. Eventually, after going on a quest for the Power Bracelets to gain Flippers, he reaches the Temple of Droplets within Lake Hylia. Link defeats the Big Octorok guarding the Water Element. Upon returning to the Human world, Link is visited by King Gustaf in the form of a ghost, marking the spot of the Royal Valley upon Link's map. Link now goes to the Castle gardens once again and sneaks through it to a secret entrance to the Elemental Sanctuary, as the King has mysteriously permitted no entry to Hyrule Castle. He fuses the Water Element into the White Sword and then travels to the Royal Valley. He traverses the Royal Crypt, obtaining a golden Kinstone piece from the ghost of Gustaf. Link then travels to the Veil Falls, and through it, reaches the Cloud Tops, home of the Wind Tribe.

Link fixes a large Updraft here and reaches the Tower of the Wind Tribe. He speaks with their elder, Siroc, who permits him entrance to the great Palace of Winds overrun by monsters. Link enters the Palace and defeats the Gyorg Pair, gaining the Wind Element. He then hurries to the Elemental Sanctuary, fusing the final element into the White Sword, creating the Four Sword and then reading an ancient story in stained glass, hidden in the Elemental Sanctuary's back chamber. It reveals that the Light Force is actually located in Princess Zelda's life force; Vaati then comes and knocks Link out, and begins a plan to drain Zelda of her life force. He transforms Hyrule Castle into a twisted counterpart that Link must traverse to reach him.

Link reaches Vaati just before he drains Zelda of all the Light Force (thus cursing her), but the Wind Mage states that he already has enough power to defeat Link. Link then fights Vaati Reborn and Vaati Transfigured, seemingly defeating him for good. Link frees Zelda from her curse as the castle is collapsing, and then he and the Princess go to the Courtyard to avoid being crushed. Vaati is waiting there for Link, and faces him one more time. His final form, Vaati's Wrath, seems invincible; however, Link defeats him a final time and destroys him for good. Vaati disappears, after saying that he is confused as to how Link beat him, claiming he has the power of a god. Ezlo floats off of Link's head and is returned to his original form. He gives the Magic Cap to Zelda, due to her having a pure heart. Zelda returns Hyrule Castle and all cursed people to normal. The doorway to the Minish World is closing and Ezlo states he must go. He says he enjoyed his time with Link, and in return provides him with a cap, saying, "I have never seen you with a cap until now. It fits you, little hero." He shrinks down and goes through the doorway just as it vanishes.

The Minish Cap features a number of enhancements that benefit from the more powerful Game Boy Advance platform and draws heavily on the gameplay of previous Zelda titles (namely the first three). The game's camera angle is much closer to the ground, allowing more detail. In the overworld and in dungeons, the game replaces the traditional item interface with pictures associating items or actions with buttons on the Game Boy handheld, similarly to the item interface in 3D titles like The Legend of Zelda: Ocarina of Time and The Legend of Zelda: The Wind Waker. Enemies include familiar creatures from the Zelda universe, such as the Keatons. Link can also perform special actions, triggered by the L and R buttons. With the R button, Link can, for example, roll while running, a move also inspired by 3D Zelda games.

On December 14, 2011, it was announced that The Minish Cap (along with nine other titles) would be available as a free Virtual Console downloadable title to Nintendo 3DS Ambassadors (those who purchased the system before its price drop).

Unique in the Zelda series, the game was released in European territories before North American market. The main cited reason for this was the Nintendo DS; with the European DS launch scheduled for spring 2005, Nintendo Europe pushed to make The Minish Cap its handheld Christmas killer app. Conversely, Nintendo America held back on its release so as not to cannibalize the DS market. 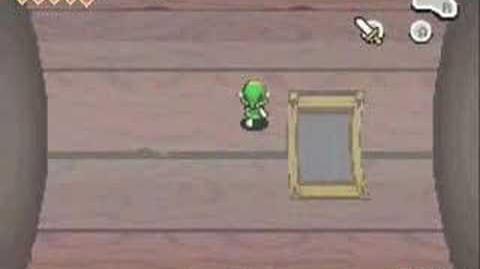 Box art for the Japanese release

Box art for the PAL version

Box art for the Australia release