There are three Links, controlled by three separate 3DS systems in multiplayer mode. In single player mode, the player can rent two paper dolls called doppels to take the place of two other players. The three Links share hearts and must work together to progress through dungeons, defeating enemies and solving puzzles. Interestingly, the three Links' hair color corresponds to their respective tunic color. There is an Energy Gauge identical to that of the gauge from A Link Between Worlds that functions the same; it depletes when an item is used, and slowly refills over time. Different items and abilities can be obtained by dressing Link in different outfits such as the Spin Attack Attire, the Lucky Loungewear, and the Big Bomb Outfit. These outfits are made by collecting loot. Wearing certain outfits will change the shape of the sword; for example, the Spin Attack Attire changes it to look like a short katana. In co-op mode, three Links can climb atop one another, creating a Totem to get items that are out of reach. While playing in co-op mode, players are able to display emoticons across the screen. Dungeons are all divided into four main areas, and numerous bosses will appear in them. For defense the Link's must either wear outfits that make attacks miss, make them immune to that kind of damage, wear the Serpent's Toga and stand still, or dodge as no Shields are in the game.

An update on December 2nd, 2015, several new features were added: the Den of Trials, the Linebeck's Uniform, the Fierce Deity Armor, and the ability to purchase Friendly Tokens at the shop stall in Hytopia.

An update on December 21st, 2015, several new features were added: Hero Points were added, which are used to upgrade the Bear Minimum Digs and obtain Materials.

The game takes place a few years after A Link Between Worlds, in the kingdom of Hytopia where everyone is very fashion sensitive. The kingdom's princess becomes cursed one day and is forced to wear incredibly ugly clothes at all times. The King issues a proclamation calling for the help of heroes from all around to help lift the curse on his daughter. This unites the three Links, and they go on a quest together. 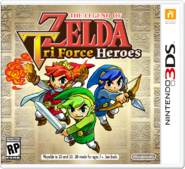 Boxart for the North American version

Artwork of the three Links 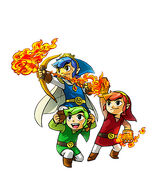 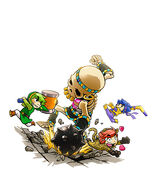 The three Links fighting the Stalchampion 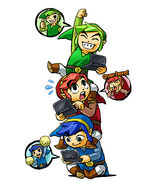 The three Links making a Totem 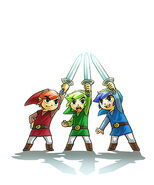