"A war between the Spirits of Good and the Demon King saw evil sealed away. The land then entrusted to the people, this princess of Hyrule traveled with the hero to save the world of Spirit Tracks. The princess's body was taken by those seeking to resurrect the Demon King, yet her spirit remained. By inhabiting the armor of a guardian of the Tower of Spirits, she used her strength to help the hero. Her massive sword deals fierce blows, and she can morph into a giant iron ball to deliver piercing attacks. By unleashing the light of her spirit, she can deal devastation to entire swaths of enemies."
— Toon Zelda, Spirit Princess of Hyrule Historical Entry Tutorial Bio

) is an alternate version of Princess Zelda that appears in Hyrule Warriors and Hyrule Warriors Legends. She is based on Ghost Zelda from The Legend of Zelda: Spirit Tracks.

As the Princess of New Hyrule, Toon Zelda possesses the Sacred Power of the Spirits, which makes her a target for Chancellor Cole and Malladus in Spirit Tracks. In her ghost form, Toon Zelda possesses various powers such as flight, intangibility, and the ability to possess Phantoms. In the Hyrule Warriors series, her End Focus Spirit Attack is depicted as capable of unleashing a powerful scream when frightened that damages enemies, along with the two rats that caused her to scream in the first place.

While possessing a Phantom, Toon Zelda gains access to its armor, weapons, and special abilities like those possessed by the Warp Phantoms and Wrecker Phantoms. In the Hyrule Warriors series, however, her Phantom appears to be a normal Phantom, though it possesses Wrecker Phantoms' ability to turn into an iron ball. She is also capable of unleashing Sword Beams from the Phantom's swords.

As a Phantom, Toon Zelda is stronger than in her original body, thus allowing her to perform feats such as carrying Toon Link. In Hyrule Warriors, she can even sheath her Phantom Arms and fight using its fists as one of her combos. She is also shown to be able to leave Phantom briefly before repossessing it. 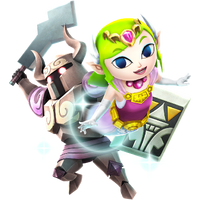 With Toon Zelda herself being an intangible ghost, she fights by possessing a Phantom and making use of its Phantom Arms, a powerful light-infused sword and shield. In addition to her sword slashes, she can also shoot Sword Beams from her final string of weak attacks, turn into an iron ball like Wrecker Phantoms to ram into enemies, or temporarily exit the Phantom to cast light magic using the Sacred Power of the Spirits.

Dark Toon Zelda is a shadowy doppelgänger of Toon Zelda who appears as an enemy in Adventure Mode. It uses the same moveset and drops the same Materials as Toon Zelda. 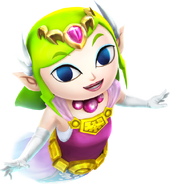 Toon Zelda as a ghost 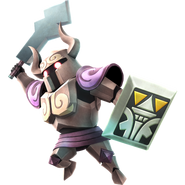 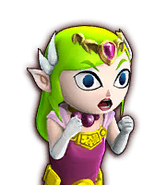 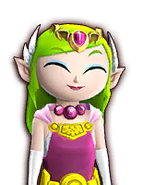 Ghost Zelda in her victory cutscene