Trinexx (デグロック, Degurokku?, Degrock) is a boss from The Legend of Zelda: A Link to the Past. It is a three-headed, stone-like turtle beast found in the seventh and next-to-last dungeon of the Dark World, Turtle Rock, located on Death Mountain. Its heads are red, gray, and blue, with the red and blue heads being able to spit fire and ice respectively. Its gray head lunges at Link soon after its tail begins to move more rapidly.

To defeat Trinexx, Link must wait until one of the colored heads tries to attack. He must then combat the colored heads by shooting the Fire Rod at the blue head and the Ice Rod at the red head. Link can then attack these heads with his sword. When his tail wags rapidly, Trinexx's center head will shoot out at Link. Once the red and blue heads are both destroyed, Trinexx's shell explodes, revealing a stone-like, serpentine body. This form of Trinexx slithers around the room, chasing Link at a high speed. Link must attack the orange, flashing center part of Trinexx's body to defeat it. 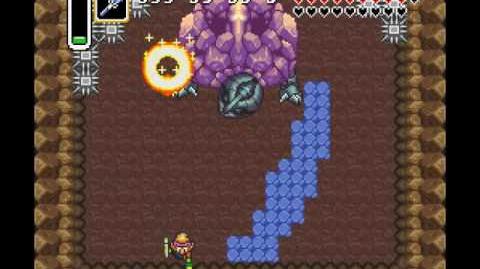 In the manga adaption of A Link to the Past Trinexx is really Link's friend Ganty, who was turned into Trinexx by Agahnim in an effort to stop Link. After Link defeated Trinexx, Ganty was returned into her original form and helped Link to defeat Ganon.

In the manga incarnation, Trinexx's head and body do not have rock-like compositions. Instead, they have a more beastly look to each of them. The red-fire head now looks more like a wolf, the ice-blue one looks like a dragon, and the middle one looks like a snake.

The name "Trinexx" uses the prefix "tri," which means "three," and "nexx" is pronounced the same way as "necks." So, Trinexx literally means "three necks," which is a reference to the three heads of the boss.

Retrieved from "https://zelda-archive.fandom.com/wiki/Trinexx?oldid=470279"
Community content is available under CC-BY-SA unless otherwise noted.