"During the Era of Twilight, Midna, the Twilight Princess herself, joined the legendary hero in saved both worlds of light and darkness. With the battle won and the curse lifted, Midna regained her true form, displaying her mysterious beauty once more. As one of royal Twilight blood, she has powers known only to the Twili people. The ancient mirror she wields strengthens her Twilight powers even further, meaning she no longer has to rely on the Fused Shadow to devastate her enemies on the battlefield."
— Twili Midna, Ruler of Twilight Historical Entry Tutorial Bio

As the Allied Hyrulean Forces are preparing for the final battle with the Dark Forces, Princess Zelda senses a dark magic that threatens to consume all of Hyrule. Determined to stop it herself, Zelda leaves with a small group of soldiers, as the others are busy preparing for the battle with Cia. Midna notices Zelda's absence and follows Zelda to the Palace of Twilight. On the way, she encounters a girl named Linkle who is mesmerized by a mysterious crystal. Midna also becomes transfixed by the crystal, which she touches, restoring her back to her true Twili form. Joined by Linkle, Twili Midna continues her quest to aid Princess Zelda. There they discover that the dark magic threatening Hyrule is out-of-control dark Twilight magic, which has produced shadowy doppelgängers of herself and Zant, Dark Twili Midna and Dark Zant. After rescuing Zelda and defeating the dark Twilight manifestations, Midna is forced to smash the mysterious crystal that had restored her true form, in order to produce enough energy to halt the flow of dark magic. This reverts her to her imp form, as it was the crystal's power that allowed her to overcome the curse and maintain her true form. Midna willingly chooses to sacrifice her true form in order to save Hyrule and her friends, leaving a profound impression on her new ally Linkle. Midna and Zelda return to prepare for the final battle with Cia. 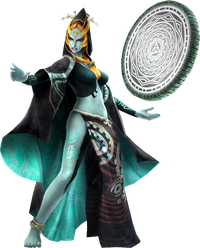 In her true form, Twili Midna possesses incredible power to the point she discards the use of the Fused Shadow as she no longer needs to rely on its dark power, implying that her true form's power is even greater. Being the true Ruler of Twilight, Twili Midna possesses powers known only to the Twili people, which she can strengthen via the ancient mirrors she wields, and is capable of completely destroying the Mirror of Twilight. Despite her power, she is shown to be vulnerable to the curses which causes her to take on her cursed imp form. In her true form she possesses most of her imp form's abilities, though on a greater scale, such as being able to summon three gigantic Twilight Wolfos. Instead of using her hair to attack enemies, however, she controls her own unique version of Zant's Hand (with a black and blue color scheme) to perform actions for which she had previously used her imp form's hair. Like her imp form, she can create Twilight Portals, use Twilight magic, and levitate. She can use her Twilight Portals to summon objects (such as Kakariko Bridge) and weapons (such as the Sky Cannon). Though she no longer requires the Fused Shadow, she can still use the Fused Shadow's spear that she uses in her eldritch form. As she attacks, her Twilight gauge fills up, increasing the speed at which she can charge her Strong Attack. Her Strong Attack allows her to create a massive field of Twilight energy (similar to the field she uses to help Wolf Link attack multiple targets in The Legend of Zelda: Twilight Princess) that will damage any enemies caught within it when it is fully charged. Though powerful, her Strong Attack charges slowly when her Twilight Gauge is empty, as its charging speed is based on how full the gauge is. 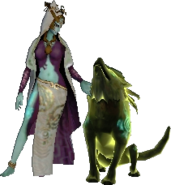 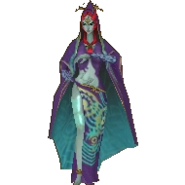 Twili Midna with her Twilight Wolfos