Zeldapedia
Register
Don't have an account?
Sign In
Advertisement
in: Articles with non-canonical information, The Legend of Zelda: Majora's Mask bosses
English

"Just its head and tail aren't protected by its hard exoskeleton, so aim carefully. If only you were the same size as it..."
— Tatl

The Twinmold boss consists of two large, segmented worm-like creatures. On each one's head is a pair of large pincers and three large eyes. On their tails, they have what appear to be stingers. The difference in color of the two worms may indicate a difference in gender, like with the Gyorg Pair. If this is the case, we can assume the red one is male and the blue one is female (As in the 3DS version of the game, Tatl refers to the red one as male) Twinmold is one of the largest bosses in the series.

After exploring Stone Tower Temple, Link unlocks the door to the boss room with a Boss Key. This is the same room where he fought the Garo Master, but instead of a hole in the ceiling with the sky above, he finds a portal in the floor. Jumping into it, Link is transported to a huge desert filled with stone monuments, some with depictions of Majora's Mask carved into them. Shortly thereafter, the monstrous Twinmold appears, burrowing out from the ground.

The easiest and most apparent way for Link to defeat Twinmold is to equip the Giant's Mask found earlier in the dungeon. Unlike other bosses, this boss is very hard to defeat using the Fierce Deity's Mask. The Giant's Mask will increase Link's size until he is the size of the worms. He can then strike their vulnerable heads or tails to damage them. Link's sword will not deal any more damage when he is wearing the Giant's Mask, but it is much easier to quickly approach Twinmold and land a hit while grown. Link is not able to Z-target Twinmold when he is this size, possibly because Tatl, who allows Link to Z-target, does not grow in size with Link. Interestingly, Link can target the Moldbabies (in the 3DS version). After Link defeats one half of Twinmold, its body explodes, leaving its head embedded in the ground. After both Twinmold halves have been defeated, the battle ends.

Alternatively, Twinmold's weak spots can be harmed by most attacks, though many require Link to approach the head or tail while it is near the ground to be in range. Twinmold can be damaged by firing arrows at one of its weak spots, and the two halves of Twinmold react differently to different elements. The blue Twinmold takes extra damage when struck by Fire Arrows, and can be defeated with only four. It is, however, resistant to Ice Arrows, and when struck by one, it only takes the damage that would be dealt by a normal arrow. The red Twinmold has the opposite reaction, taking extra damage from Ice Arrows, but is resistant to Fire Arrows. Both halves are partially resistant to Light Arrows, taking only half of the extra damage that would usually be dealt, requiring six to be defeated.

Interestingly, if Link strays too far from the center of the desert, he falls through the sand and is transported back to the entrance of the dungeon. He must fight his way back to the boss room and restart the battle from the beginning. 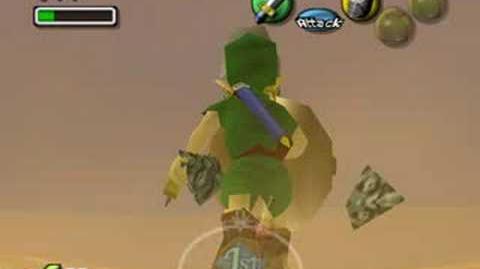 In The Legend of Zelda: Majora's Mask 3D

In the Nintendo 3DS remake of Majora's Mask, significant changes have been made to Twinmold's battle. Instead of being fought at the same time, Link first encounters the blue Twinmold, which can be defeated by shooting its eyes with arrows (in subsequent encounters, the Giant's Mask can be used). Attacking the eyes causes the blue Twinmold to fall and expose its large eye, which is its true weakness.

Once the blue Twinmold is defeated, Link obtains the Giant's Mask. The Giant's Mask is essential to defeat the Red Twinmold, who now attacks with fireballs and spawns Moldbabies. These Moldbabies drop Magic Jars and Hearts. Link must hit the Red Twinmold in the air three times consecutively - if it burrows underground, Link must begin his attacks again. Alternatively, Link can pick up boulders to throw at the Red Twinmold. Once attacked successfully, it will fall to the ground, enabling Link to slam it into the ground by the tail for massive damage, or choke it by holding its head.

Twinmold is similar in appearance to its in-game iteration; however, only one Twinmold is ever shown or mentioned. After defeating Twinmold, Link meets the last of the Four Giants. The quest to reunite Anju and Kafei composes the remainder of the chapter in which this occurs.

The name "Twinmold" may be a portmanteau of the names twin and "Moldorm".