"This is the combined form of Kotake and Koume. Turn their magic attack back at them!"
— Navi

Sorceress Sisters: Twinrova (双生魔導師ツインローバ, Sōsei Madōshi Tsuinrōba?, Twin Sorceresses: Twinrova) are bosses from The Legend of Zelda: Ocarina of Time. They can be found in the Spirit Temple, the fifth dungeon in the adult portion of the game and the ninth dungeon overall. Twinrova is fought both as two separate entities, and one singular unit. Koume controls fire, while Kotake controls ice.

Koume and Kotake, collectively Twinrova, served as surrogate mothers for Ganondorf and are very loyal to their "son's" cause. They are first seen chasing Nabooru from the Spirit Temple, whom they capture before retreating back inside. When Link returns as an adult seven years later, it is revealed that they used the Gerudo leader as a personal Iron Knuckle guard, having brainwashed her to serve their son. Upon revealing Nabooru, they teleport her to places unknown before taunting Link and leaving for their boss chamber.

After their defeat, Koume and Kotake die, as halos appear above their heads. They bicker about who is the younger sister as they fade away into a shining light. However, they swear they will return to haunt Link. Interestingly in this sentence, they use the term "I" instead of "we." This could mean only one is saying it, that they really are only one person able to split in two or that they could both be saying it in unison. In Ocarina of Time 3D, however, they use the term we.

In their first form, Koume and Kotake are reflected as "having" a different element (fire or ice). When one of the old witches fires a beam of fire or ice at Link, he must pick up his mirror shield quickly for reflecting it upon the other witch for a few seconds. In doing so, the element of ice is attacked by the element of fire, and vice versa. After this process is done a total of four times, or after enough time has passed, they will fuse to create Twinrova, an extremely powerful witch, who is the true boss. Shortly after fusing and making Link gasp, Twinrova winks at a shocked Link.

The two witches combined together supposedly form the ultimate combination with no weaknesses. She shoots either a fire beam or an ice beam. When she fires magic at Link, he must let it strike into the Mirror Shield to absorb it. Absorbing the opposite elements will damage Link, so he must dodge Twinrova's attacks until she fires a second and third attack of the same element. After absorbing the same element three times, it fires back, damaging her, and allowing Link to strike her with his sword. After repeating this several times, Twinrova is defeated. Twinrova then splits back into Kotake and Koume and they are ironically sent to heaven after a humorous scene of the two arguing. After the scene Nabooru rewards Link with the Spirit Medallion. 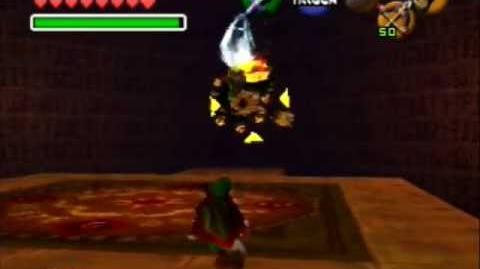 Retrieved from "https://zelda-archive.fandom.com/wiki/Twinrova_(Ocarina_of_Time)?oldid=485480"
Community content is available under CC-BY-SA unless otherwise noted.