Zeldapedia
Register
Don't have an account?
Sign In
Advertisement
in: Articles with non-canonical information, Final bosses, Gerudo,
and 2 more
English

In the first regular game in a Linked Game session, Koume and Kotake first appear in the guise of an elderly woman to dissuade Link from pursuing his quests against Veran or Onox, depending on who Link tackles first. They once again appear before the final confrontation with that villain, revealing themselves to be in fact Koume and Kotake before flying off once again. After defeating one of the two villains, it is revealed that he/she lit their corresponding Flame of the Dark Rites, which is needed to revive their surrogate son, Ganon. Veran's sowing of misery lights the Flame of Sorrow, while Onox's rampage lights the Flame of Destruction.

It is revealed that Twinrova were in fact using Veran and Onox as unwitting pawns in an attempt to light these said flames and resurrect Ganon. To complete these, they also kidnapped Princess Zelda in order to sacrifice her and light the third and final Flame of Despair. Link intervenes, however, and rescues Zelda after confronting the witches. Desperate, they sacrifice themselves as a replacement for Zelda, but since they were not pure of heart, Ganon was revived as a mindless, raging monster rather than his old, cunning self.

Link takes out his Scent or Mystery Seeds with the Hyper Slingshot or Seed Shooter. If Twinrova is in her fire form, Link needs to avoid falling into the lava pools scattered throughout the battlefield; if Twinrova is in her ice form, giant ice clusters fly around the room and ricochet off the walls, damaging Link if they hit him, and the floors are icy and Link has trouble getting a good footing unless he uses the Snowshoe Ring. After he attacks her enough, she will face Link, revealing both of her fire and ice side at once. Link uses his Hyper Slingshot/Seed Shooter to shoot her with the scent/mystery seeds. After being hit several times, she is defeated, and unable to sacrifice Zelda; however, she makes an impromptu sacrifice of herself to revive Ganon. 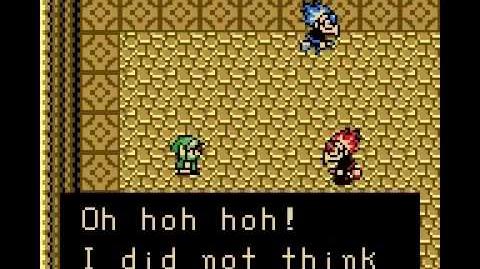 The Legend of Zelda: Oracle of Seasons manga

While Link is heading to fight General Onox, Koume and Kotake disguise themselves as old women in order to throw Link, Maple and Ricky into a trap. After Veran is defeated and the Flame of Sorrow is lit, Koume and Kotake immediately sacrifice themselves to light the last Flame of Despair, without fighting nor merging into Twinrova beforehand.

Twinrova from the ending of Oracle of Seasons