"I was once a famous sage and a renowned Minish craftsman. Vaati was only a boy when I took him on as my apprentice. But...he became enchanted by the wickedness in the hearts of men."
— Ezlo

) is a recurring antagonist in the Legend of Zelda series. Vaati is selfish and self-serving, seeking only to fulfill his personal desires. Having been corrupted by learning of the evil within the hearts of men, he instinctively seeks power. Vaati's background was not revealed until the storyline of The Legend of Zelda: The Minish Cap.

Vaati's personality is that of self-servitude and a desire for power, traits which originate from his witnessing the corruption in the hearts of humans. He is also shown to be cruel, cursing his former master upon becoming a sorcerer. He also displays considerable arrogance, believing himself capable of overpowering Link with ease on multiple occasions. He is also very lustful towards females, as demonstrated in The Legend of Zelda: Four Swords by his intention to make Princess Zelda his bride, as well as his backstory involving the kidnapping of various maidens who caught his fancy.

When Vaati takes the Magic Cap, his wish to become a powerful sorcerer is granted. He has displayed the ability to transfigure people or turn them into stone, and transfigure himself so as to impersonate others. Vaati can also teleport at will, summon monsters, and even transforms the whole of Hyrule Castle into a dark version of its former self. He also won the annual sword-fighting tournament during the Picori Festival in record time using "incredible techniques", though it is unknown if he performed these feats using magic or actual sword skill.

After draining a portion of the Light Force, Vaati battles Link for the first time, displaying a variety of magic based attacks, and eventually transforming himself into a monstrous winged orb with a single red eye. He remains in this form during Four Swords and Four Swords Adventures. He displays the ability to create cyclones in these games, and also retreats to the sky. Vaati is often referred to as a "wind mage" in Four Swords.

Prior to the events of the game, Vaati had often kidnapped various girls that caught his fancy. He was then sealed within the Four Sword by a boy after several failed attempts by various knights to retrieve the girls from Vaati. When Princess Zelda senses that the seal holding Vaati within the Four Sword is weakening, she and Link go to the Four Sword Sanctuary to check it. As Zelda approaches, Vaati escapes and captures her, telling her that he will reign again and make her his bride. As Vaati escapes to his palace, Link is knocked out. After he recovers, he takes the Four Sword and sets off for Vaati's Palace as well. After being defeated, Vaati is once again sealed inside the Four Sword.

According to the Hyrule Historia, Vaati has forgotten his days as a Minish and goes on a rampage, manipulating the wind and naming himself "The Great Wind Sorcerer Vaati."

When Ganon steals the Dark Mirror to create Shadow Links, Princess Zelda and the Six Maidens are kidnapped. Upon following Shadow Link into the Four Sword's chamber, Link draws the Four Sword, releasing Vaati. After traveling to the Realm of the Heavens, Link defeats Vaati, only to be confronted by Ganon as he and Princess Zelda near the exit of the Tower of Winds. The two succeed in sealing Ganon inside the Four Sword, while it is unknown whether Vaati is actually destroyed or merely sealed inside the Dark World.

Vaati, a Minish, was made the apprentice to the Minish sage Ezlo when he was a child. When Ezlo fashioned a powerful cap that could grant wishes as a gift for the Hylians, Vaati stole the cap when his master was away. He then used the cap to grant his wish to become a powerful sorcerer, transforming into a Hylian-like form and explaining to Ezlo his plan to obtain the mystical Light Force at the upcoming Picori Festival, which he would use to obtain god-like powers. As he leaves, Vaati curses his master, transforming him into a green, bird-shaped hat.

At the Picori Festival, Vaati wins the annual sword-fighting tournament, allowing him to touch the sacred blade of the Minish. When the Bound Chest is brought before him, Vaati breaks the seal on the chest, releasing the evil forces inside. After Princess Zelda displays her ability to repel the escaping monsters, Vaati turns her to stone, knowing that she would only cause him trouble later. Upon looking into the chest, he finds that the light force does not reside within, and leaves to search for it elsewhere in Hyrule.

While Link is collecting the Four Elements to infuse with the broken Four Sword, Vaati possesses King Daltus, who proceeds to use the Hyrulean Soldiers to help his search for the Light Force. Once Link restores the Four Sword, he discovers that Hyrule Castle has been warped by Vaati's dark magic. After Link battles Vaati twice, Princess Zelda is healed, and she, Link, and Ezlo try to escape Hyrule Castle. However, they are forced to run to the Courtyard, where Link is transported to a strange place and does battle with Vaati one final time. After this, Vaati is defeated.

Strangely, he shares the same laughing sound byte as the Happy Mask Salesman from Majora's Mask.

He is defeated when Shadow Link destroys the Dark Mirror, his life source. Vaati is shown to be more of a leader, with his army deferring to him on the question of who would finish Link off. The horns on his head are separated, not joined in a crescent shape as they are in the game.

The Legend of Zelda: The Minish Cap manga

Vaati's appearance and actions are roughly the same as in the game. He personally follows Link to the Elemental Sanctuary in the guise of the King, before revealing his true form and intentions. After transforming Hyrule Castle into his own dark version, he battles Link in several forms of his choosing before the dark power consumes him and forces him into the form of a hideous monster. Link slays the beast, and Vaati is restored to his Picori form. He leaves with Ezlo to the realm of the Minish, and the Minish Cap is given to Link in his stead. In this story, Vaati became evil due to wanting to surpass his Master. He saw "how the strong and the proud did bad things" in the human world, so thought that maybe if he was evil, things would not be so hard for him.

The Legend of Zelda: Ocarina of Time cameo

It is possible that Vaati makes an obscure cameo appearance in The Legend of Zelda: Ocarina of Time: found inside the Shooting Gallery (both in Hyrule Castle Town when Link is a youth, and in Kakariko Village as an adult) are three posters on the leftmost wall. These three posters contain an image of a creature strongly resembling Vaati in his Wind Mage form. However, as Ocarina of Time predates Vaati's first appearance in Four Swords by roughly five years, it is highly likely that these posters refer to another enemy characterized by its single eye, such as Queen Gohma or DethI. However it does fit the timeline as The Minish Cap occurs before Ocarina of Time thus the posters may be of Vaati. They may also be intended as a cameo of the villain Dark Matter from the Kirby series. Judging by the design, it is possible that these posters are wanted posters, possibly offering a reward for the capture or slaying of the enemy depicted. There is also a possibility that these posters were a base for Vaati's forms.

A similar image can be seen in the Spirit Temple, in the room containing the Anubis, above a Hylian inscription on the eastern wall.

Vaati's name in the original Japanese version of the games, "Gufu" (颶風, Gufū?), means "tornado", which is fitting considering his title of "Wind Mage."

Vaati's English name could have come from the word "Batty", but said in a Japanese style format, as the letters "V" and "B" are sometimes interchangeable in the Japanese language, with "aa" being pronounced as "a" and "ti" being pronounced as "tty", which could insinuate that Vaati's name was created from a Japanese slang term as "Batty" and "Vaati" can be interchangeable. It also bears some resemblance to "Venti," the Italian word for "winds," which also fits in with his title of "Wind Mage."

Vaati from Four Swords Adventures as depicted on the GameCube 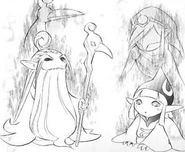 Ezlo and Vaati, being restored to their original forms, from The Minish Cap manga
Español Português do Brasil
Community content is available under CC-BY-SA unless otherwise noted.
Advertisement