Zeldapedia
Register
Don't have an account?
Sign In
Advertisement
in: Final bosses, The Legend of Zelda: The Minish Cap bosses
English

After defeating Vaati Reborn and Vaati Transfigured, Link proceeds to break the curse on Princess Zelda. However as soon as they reunite Dark Hyrule Castle begins to crumble around them. Finding the exit blocked they head towards the Four Sword Sanctuary. However just before escaping Vaati appears again and challenges Link to one final battle.

Vaati's final form looks similar to his final form from The Legend of Zelda: Four Swords. He sprouts two arms which both end in pincer-like claws. When he plunges one of the claws into the ground and reappears elsewhere to grab Link, Link must use the Cane of Pacci to flip it upside down. He can then enter it by shrinking down to Minish size. Inside are many small eyes and one eye with a red pupil. After destroying the eye, the arm is also destroyed. In the second arm, it will be completely dark, so Link must use the Flame Lantern to illuminate the area.

After both arms are destroyed, the four small eyes in front of Vaati's Wrath open and his body gains small, batlike wings. Vaati's Wrath will then switch off between two attacks, the first being a wave of small electricity balls. The other attack is sent out by the four eyes in front of Vaati. By cloning himself, Link can repel these projectiles back at Vaati, temporarily stunning him. After enough damage has been delivered, Vaati is defeated. 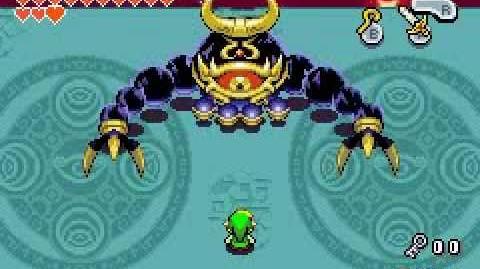 Vaati after he is defeated