Vaati Reborn (魔神グフー, Majin Gufū?, Demonic Spirit: Gufu) is the first incarnation of Vaati, the final boss of The Legend of Zelda: The Minish Cap.

Having taken over Hyrule Castle and turned it into Dark Hyrule Castle, Vaati begins to drain the Light Force from Princess Zelda. When Link confronts Vaati, he believes he has drained enough of the Light Force to defeat Link, and transforms into Vaati Reborn beginning the battle.

Vaati's first form is the shape of a tall, slim, robed figure. He is surrounded by small orbs which can shoot out a laser attack while Vaati himself shoots out fire at Link. Vaati may also absorb the orbs to generate a sphere of black energy that chases Link around. To damage Vaati Reborn, Link must attack the eye on his abdomen after all the orbs have been destroyed. After enough damage, the orbs reappear with a dark flame around them. Using the Gust Jar, the flame can be extinguished, allowing them to be destroyed with the sword. At this stage of the fight, Vaati will teleport randomly around the room when in his vulnerable phase, often disappearing right as Link approaches. After enough damage to his abdominal eye he transforms. 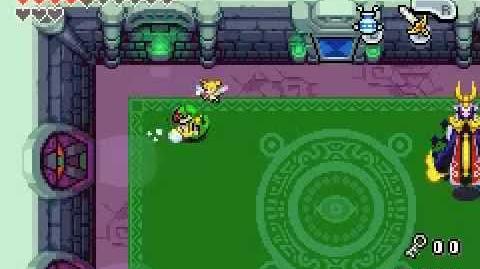 Retrieved from "https://zelda-archive.fandom.com/wiki/Vaati_Reborn?oldid=493059"
Community content is available under CC-BY-SA unless otherwise noted.