Vaati Transfigured takes on the form of a large spherical mass, similar to his other forms seen in previous games. Vaati Transfigured will use three different attacks. First, he shoots out spiked objects, which remain on the ground until Link destroys them with his sword. If Link touches them, they deal damage. Second, he will pound down on the ground, sending a shower of rocks down. Finally, Vaati will shoot electrical projectiles at Link.

Around his body are eight blue orbs. To damage Vaati Transfigured, Link must find which four of the eight orbs are the real eyes by shooting an Arrow at them from his Bow. These will always be consecutive, covering two sides of his body. Once four of the eyes have turned red, Link can use the Four Sword to clone himself in the correct configuration that the eyes are located. After lining up with the red eyes, Link can damage Vaati with his sword. After enough hits, Vaati transforms one final time.

A more challenging alternative to using the splitting tiles is to utilize the Great Spin Attack. With precise aim, Link can actually hit all four eyes at once. Link can use Vaati's motion path against him by pressing toward the eye pattern while Vaati moves towards Link. This is easier to do when the pattern is on one of Vaati's sides. The Downthrust, with precise timing, can also hit all the opened eyes with its impact area; however, this can easily place Link right on top of Vaati, causing him to take damage. 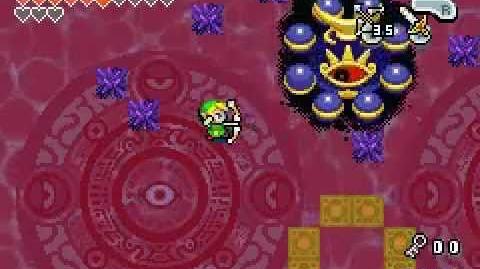 Retrieved from "https://zelda-archive.fandom.com/wiki/Vaati_Transfigured?oldid=446879"
Community content is available under CC-BY-SA unless otherwise noted.