Zeldapedia
Register
Don't have an account?
Sign In
Advertisement
in: Articles with non-canonical information, Articles incorporating theory, The Legend of Zelda: Oracle of Ages characters
English

This page is about the character. For the boss fight, see Veran (boss).

"Thank you, Link! You allowed me to pass through the sacred barrier! I've been waiting for this moment! I am Veran, Sorceress of Shadows! Nayru! Oracle of Ages! I shall make your body my own! Ah hah hah hah!"
— Veran

Veran (ベラン, Beran?), the Sorceress of Shadows (闇の司祭, Yami no Shisai?), is the primary antagonist of The Legend of Zelda: Oracle of Ages. She, like General Onox, is being used by Koume and Kotake to fill the land of Labrynna with sorrow. She succeeds in her goal by possessing Nayru, the Oracle of Ages, and later, Queen Ambi. Even though Link defeats her, her purpose is still fulfilled, enabling the resurrection of Ganon. 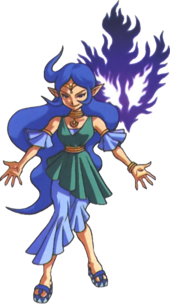 At the beginning of Link's adventure, Veran has possessed Impa. Using her body, she tricks Link into pushing a Triforce-marked rock, whose holy symbol had been deterring her, out of the way. She then reveals herself to be Veran and possesses Nayru. She uses Nayru's powers to go back in time and become Queen Ambi's most trusted advisor. Veran then convinces the queen to have the people of Labrynna work constantly on the Black Tower, a tower Ambi ordered built in order to guide her lost love home from the sea. In doing so, Veran twists the project towards her own ends, having it slowly become an object of evil rather than love. As a direct result of Veran's meddling with the timeline via Nayru, the timeline ended up radically altered. This included a man aging acceleratedly and scaring off his girlfriend, several monkeys vanishing, and a boy being rendered petrified right in front of his mother. Link eventually confronts Veran midway through his journey, using Mystery Seeds against her, which Veran previously admitted to having an adversion to. After he exorcizes Veran from Nayru's body with the seeds and wounding her, Veran makes a bold move by possessing Queen Ambi herself. She attempts to have "Ambi's" guards detain Link, Ralph, and Nayru, although Nayru used her time travel abilities to warp them away before the guards could get close. As a result of Nayru being freed of her possession, time was restored to the present.

With Ambi's body, she completes the Black Tower and continues to torment the people of Labrynna with her rule. Meanwhile, Link, with the help of the Harp of Ages, retrieves all of the Essences of Time. This makes the Maku Tree produce a Maku Seed, which has the power to dispel the magic cast on the Black Tower. He confronts Veran once more at the top of her tower. After a battle similar to their previous encounter, Veran appears to be defeated after Link removes her from Ambi's body. However, after Ambi leaves, Veran attempts to possess Link, but Link dodges her at the last second. Then she suddenly transforms into a demonic, fairy-like form and summons multiple, yet weak, Dark Links. After another defeat, the tower begins collapsing, but Veran, somehow still alive, uses a Wallmaster to capture Link and have him face her a fourth and final time. She reluctantly assumes a grotesque turtle-like form, which morphs into a bee or spider at will, all of which share her face. After a hard-fought battle, she is finally defeated once and for all, and upon her demise the Flame of Sorrow is lit, as Koume and Kotake watch.

Veran appears as a teal-skinned humanoid woman with a lightly-armored dress. Her abilities are very similar to that of a Wizzrobe, as she can teleport at will, create a flurry of fireballs, and summon spider-like creatures from the ceiling. One of her more terrifying abilities is to possess other beings, forcing them to do her bidding. Those under her possession gain her teal skin, but this never seems to be noticed by other characters. Veran can assume other shapes seemingly at will, her favored being her Evil Fairy form. With this she can spit fireballs and fly quickly, as well as produce at least four weak Shadow Links. If this fails, she can assume several animal forms. This is supposedly her last resort, as she decidedly finds these transformations to be utterly repulsive. She also has some petrification skills as well, which was demonstrated twice: The first time occurred when she possessed Nayru and escaped into the past, where her meddling with the timeline resulted in a boy being petrified in the present timeline, horrifying his mother. The second time occurred after she possessed Queen Ambi and had the Black Tower completed, where she turned a father and his eldest child into stone while the latter and his younger brother were playing catch, as well as three rabbits being petrified while hopping with a group of rabbits. Both times, the petrification was undone after Veran was forced to abandon Nayru as her host and after Veran was killed, respectively.

Veran is manipulative, cruel, and ambitious, using her alliance with Koume and Kotake for her own advantage. It is unknown if Koume and Kotake gave her the potent magical abilities she demonstrates or if she mastered them by her own studies. She is also somewhat conceited, declaring her own beauty several times throughout the game. She does seem to be capable of granting mercy to a certain extent, as evidenced by her sparing Ralph's life, though this could also merely be a ploy to force Link not to attack her in order to protect Ralph, since she is in Ralph's ancestor's body. It is also somewhat interesting to note the vaguely Sheikah-like eye designs on her dress, and the symbol on her shoulder pads that she shares with General Onox. Despite using her alliance to Twinrova for her own ends, however, she nonetheless was loyal to her mission to create the Flame of Sorrow in Labrynna, explicitly taking joy in the fact that despite her death, she nonetheless succeeded in her mission.

The Legend of Zelda: Oracle of Ages manga

Veran plays much of the same role as she does in the game itself. She does, however, have a slightly altered storyline, performing various acts such as possessing Ralph. Also, in the final battle with Link, her only alternate form is a spider. The manga also briefly expands on her motivations for wanting to cause discord, as she believes that peace and prosperity are boring in Labrynna, and thus wants to allow for a world where fighting with permanent hatred would allow for excitement.

Veran shares the same hair color, eye color, and some of the same skin color as the true form of Midna from The Legend of Zelda: Twilight Princess, which is interpreted by some as evidence that she is a Twili. Veran is also said to be "extending the reach of the Dark Realm" with her actions. This may also be a simple coincidence, as there is no particular evidence that this refers to the Twilight Realm. However it should be noted that her appearance in the series predates Twilight Princess and the Twili (as Oracle of Ages was released in 2001, five years before Twilight Princess).

Another possibility is that she is a Demon as the Dark Realm in Spirit Tracks is home to the Demons Chancellor Cole, Malladus, and the Demon Train. Her ability to possess others is an ability traditionally associated with Demons (Demon King Malladus is also able to possess others in Spirit Tracks) and could be a form of demonic possession. Chancellor Cole has a similar skin color to Veran's when he is possessed by Malladus.

The Gerudo symbol on her dress, red hair, and her association with Twinrova could indicate that she is a Gerudo sorceress/witch. Her skin color is similar to greenish skin tone possessed by other dark magic wielding Gerudo, Koume, Kotake, Twinrova, and Ganondorf.

Veran may have served as the inspiration for Cia as both are attractive female villains who are being manipulated by a greater evil (Twinrova & Ganondorf respectively) and possess the ability to summon Dark Links. They also have similar titles as Cia is known as the both the Black Sorceress and Dark Sorceress. The difference between the two, however, is that Veran willingly served Twinrova and, by extension, Ganon, even being pleased that even in her defeat, she still managed to succeed in her mission to light the flame of sorrow allowing for the Demon King's revival, while Cia was possessed by Ganondorf for most of the game, and upon being freed from possession, considered Ganon her enemy. In addition, Cia, ends up either dying of regret (the initial Hyrule Warriors) or otherwise being redeemed (Hyrule Warriors Legends), while Veran died unrepentant.