Zeldapedia
Register
Don't have an account?
Sign In
Advertisement
in: The Legend of Zelda: A Link to the Past bosses
English

Vitreous (ゲルドーガ, Gerudōga?, Gerudoga) is the boss of Misery Mire, the sixth dungeon in the Dark World of The Legend of Zelda: A Link to the Past. Vitreous is one huge eyeball surrounded by many smaller eyeballs.

To defeat Vitreous, Link must slash mini-eyeballs repeatedly with his sword. This process goes faster if he has the Tempered Sword. Link can also shoot the smaller eyeballs with arrows. Aside from the slow-moving mini-eyeballs, Vitreous will only attack Link by shooting lightning at him. Vitreous indicates when it is about to attack by turning green to white. When this happens, Link should run to the opposite side of the room. Link can eliminate many of the eyes easily by approaching closely and performing a spin attack. He should be cautious, however, for this is very risky — Vitreous will still shoot lightning and the mini-eyeballs may attack after the spin attack and while charging the spin attack. Link can also use the Magic Cape to render himself immune to the damaging water and eyeballs, and simply hack at the mini-eyeballs under the Cape's protection.

Once all the mini-eyeballs are gone, save for the ones that do not attack, Vitreous starts bouncing around the room trying to squish Link. An easy way to defeat him in this form is to shoot him with arrows many times in a row until it dies. Alternatively, the sword is a slightly riskier but just as effective method. Link will be rewarded with a Heart Container and the crystal containing the sixth maiden.

As a note of interest and caution, the liquid surrounding Vitreous is harmful until its defeat; as such, Link should not touch it. 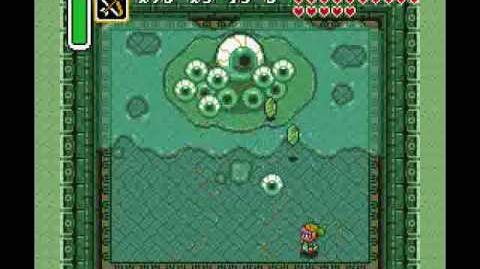 Vitreous is named after a thick, transparent substance that fills the center of the eye, the vitreous humour.