Scorching Berserker
Dragon Knight
The Dragon of the Caves

For most of Hyrule Warriors, Volga acts as Cia's subordinate who seeks to fight strong opponents. Differing from Wizzro, Volga is an honorable warrior who faces his opponents head on, always confident in his abilities to overcome his opponents.

Before his encounter with Cia, Volga was originally a noble dragon guardian of the Eldin Caves who preferred to stay out of conflicts started by humans. During his final battle with the Hyrulean Forces, Princess Zelda is able to reawaken his noble spirit, undoing Cia's brainwashing; however, his code of honor causes him to choose to die honorably while fighting the Hyrulean Forces one last time, making him a tragic figure.

Little is revealed of Volga's history, other than that he is a noble dragon warrior who lives in the Eldin Caves with an army of fiercely loyal Lizalfos, Dinolfos, Bulblins, and two King Dodongos who serve him. Though only implied in-game by his design and name, he was intended by the developers to be the Hyrule Warriors incarnation of Volvagia. Before Cia's invasion, Volga was originally the Dragon Guardian of the Eldin Caves; his duty was to protect it from outside forces while ruling his monster followers and allowing the Gorons to both mine there and seal Wizzro's Ring within the Crystal Cave keep.

Cia's Tale: The Dragon of the Caves

After being possessed by a fragment of Ganon's spirit, Cia seeks out Volga, wishing him to be a general in her army, and ventures into the Eldin Caves in search of the dragon knight. With the aid of Wizzro, Cia finds Volga and tries to convince him to work for her; however, he tells her he has no interest in humans or their wars and tells her to leave. Determined that Volga will serve her, Cia and her forces engage Volga and Volga's Army. Cia and her army manage to defeat Volga's forces, including the two King Dodongos, despite a betrayal by Wizzro. Though Volga still refuses to serve her, Cia decides to use her magic to brainwash and empower both Volga and Wizzro into servitude. Volga joins Cia as one of her top generals, putting both his might and his forces under her control.

The Armies of Ruin

Volga, alongside Wizzro, commands the force of monsters that Cia sends to attack Hyrule Castle, leading the vanguard. He eventually confronts Link (at the time a knight in training) while fighting Impa; however, after Link shields Impa from Volga's fiery blast, Volga discovers that Link possesses the Triforce of Courage, and is forced to retreat.

The Sorceress of the Valley

He later appears at the Valley of Seers, where he ambushes Impa when she is approaching the Western Fortress. He is driven off by Lana, though not before vowing to return for a rematch.

Land in the Sky

After Cia opens the Gate of Souls, Volga travels to the Era of Skyloft, where he forges an alliance with the Demon Lord Ghirahim, although Volga's arrogance is such that even Ghirahim is disgusted with it. Volga, likewise, suspects that Ghirahim is inherently untrustworthy, and informs Cia that he is most likely insincere in his desire to join her. After Ghirahim is forced to retreat by Fi and Link, and after Levias grants access to Volga and Ghirahim's territory, Link fights Volga as he is preparing to advance into Skyloft. Although the battle is evenly matched, Volga eventually overpower Link and Fi, forcing them to retreat to the Great Fairy's fountain to grant Levias enough food to summon a lightning storm to weaken Volga. Afterwards, they manage to drive him off.

After Ganondorf invades the Valley of Seers to confront Cia, Volga independently attempts to attack Ganondorf's stronghold, though he is forced to retreat due to a barrier placed around Ganondorf's base.

He later appears at the Valley of Seers, where Cia uses her powers to increase his own, making him nearly unstoppable. After just barely being beaten near the Great Fairy's fountain, he retreats and to power up even more; however, Zelda manages to appeal to Volga's warrior pride to cast off Cia's influence and fight Link with his own abilities to prove his own skills as a warrior. Volga is quickly killed by Link, though he remarks that he does not have any regrets with death; Cia expresses her irritation at Volga's last moments. 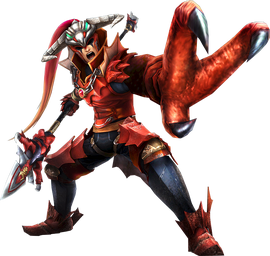 Volga is a powerful and experienced warrior who commands an army, which is why Cia selected him as a prime candidate to serve as a general in the Dark Forces. Volga is capable transforming between his dragon and humanoid knight forms at will. While in knight form, he can use parts of his dragon form, such as transforming his arms into dragon claws or growing dragon wings on his back. He also possesses the dragon race's signature ability to breathe fire, which he can use in either form.

Dark Volga is a shadowy doppelgänger of Volga that appears as an enemy in Adventure Mode. He has the same moveset and material drops as Volga. He can also transform into a dark version of Volga's dragon form. 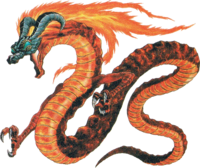 Volga's design is based on Volvagia, a Boss from The Legend of Zelda: Ocarina of Time. The designers purposely made him look as inhuman as possible, so that when players encountered him, they would instantly know he was an incarnation of Volvagia.

Due to his immense strength and ability to go into a fit of rage where he is near invincible, Volga has drawn comparisons to Lu Bu, a character with similar traits from the Dynasty Warriors series; Volga's "Standard Outfit (Twilight)" is a recolor outfit based on Lu Bu.

He also shares some similarities with General Onox, in that he is a heavily armored warrior who can transform into a mighty Dragon.

Volga's Helmet and overall persona are based on Volvagia. Due to this, Volga's name is derived from Volvagia's. 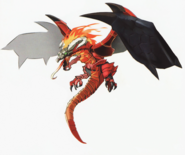 Volga in his dragon form 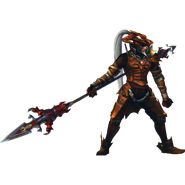