This article is about the Ocarina of Time boss. For the boss from The Adventure of Link, see Barba.

"A long time ago there was an evil dragon named Volvagia living in this mountain. That dragon was very scary! He ate Gorons! Using a huge hammer, the hero of the Gorons... BOOOM! Destroyed it just like that. This is a myth from long ago, but it's true! I know, because my dad is a descendant of the hero!"
— Link of the Gorons

) is the boss of the Fire Temple, the second dungeon in the adult portion of The Legend of Zelda: Ocarina of Time, and the fifth dungeon overall. Volvagia is a monstrous dragon and was a blight upon Hyrule, specifically Death Mountain, for many years prior to the events of the game. He flies through the air in a blaze of fire and dives through pools of molten lava, unharmed despite their intense heat. Volvagia is infamous among the Gorons for devouring their kind alive, but was eventually defeated and slain by the Hero of the Gorons, who wielded the Megaton Hammer.

Volvagia is a serpentine creature armored in red scales. He boasts two forelimbs equipped with claws and his cranium is covered, presumably, by a helmet-like exoskeleton. A fiery mane streaming from his neck is capable of inflicting injuries when he whips his head. Although Volvagia lacks wings, he is capable of flight.

The dragon inhabits environments of intense heat filled with molten magma. He spends his time submerged in the magma and will occasionally emerge to assail intruders with his fire breath.

Volvagia has existed since ancient times. He was known for his appetite for Gorons and he spread fear and consternation throughout the tribe. Although Volvagia consumed a good portion of the race, he was finally bested by the Hero of the Gorons who defeated him with the assistance of the legendary hammer from the Fire Temple. Although little about the hero was known (save that he was an ancestor of Darunia), his legacy, as well as Volvagia’s, would continue for generations to come.

After an untold number of years, Volvagia is revived by Ganondorf. The ring of clouds surrounding Death Mountain catch fire, reflecting the impending danger. Following this sequence of events, Ganondorf's forces invade Goron City and capture all of the Gorons except for Darunia, his son, Medigoron, Biggoron and the Goron Shop Owner. The captured Gorons are imprisoned inside the Fire Temple for Volvagia to feed on. Ganondorf executes the deed to exemplify the fate of the races who opposed his despotic rule.

Fortunately, Link receives word of Ganondorf's scheme before it could be accomplished. At once, Link heads for the Fire Temple where he meets Darunia directly outside the door to Volvagia's lair. The Goron chieftain tells Link that it is his intent to seal Volvagia inside before it manages to escape, despite not being the holder of the legendary hammer. He beseeches Link to free the other Gorons while he fought with Volvagia. Subsequently, Link ventures through the entire temple, liberates the imprisoned Gorons, and obtains the Megaton Hammer along the way. He then returns to the room he had last seen Darunia and uses the Boss Key to open the door to Volvagia's pit. Once inside, he finds no sign of Darunia. Suddenly, the path behind him melts, and Volvagia emerges from the volcanic magma.

The Hyrule Historia states that Volvagia is thought to be the ancestor of the guardian spirit Valoo from The Legend of Zelda: The Wind Waker, despite Volvagia's evil nature and death at the hands of Link. However, the book does not state this as fact but rather states that it is a possibility.

Volvagia begins the battle by flying into one of the nine magma pits on the platform upon which the two will battle. One of the pits will begin to bubble, and Volvagia will emerge from it. Link must use the Megaton Hammer to strike his head and stun him. If this is not done quickly enough and Link is too close, Volvagia will strike Link with his claws and go back into the magma hole. If Link is beyond the range of his claws, Volvagia will breathe fire at him instead. After being stunned, Volvagia is vulnerable to attack from Link's sword or hammer.

Volvagia can fly out of the magma pit and execute one of two different methods of attack. For his first tactic, he will fly around and breathe fire at Link. He is vulnerable to arrows while flying; if hit, he will not attempt to breathe fire. For his second tactic, Volvagia will fly up to the top of the room and cause boulders to fall from the ceiling. The best method to minimize damage in this stage is to run around the platform on its outer sides, or to climb down one of the sides. Volvagia continues to alternate between these two attack patterns.

As the battle progresses, multiple pits on the platform will bubble before Volvagia emerges, making it slightly more difficult to predict where he will emerge. Eventually, after taking enough damage, Volvagia flies around the room, roaring in pain, and soon burns into a skeleton. While the rest of his bones shatter, the skull lands in front of Link, gasping for his last breath of air. The head then shrinks in a blue flame. Link is rewarded with a Heart Container and is teleported to the Chamber of Sages in the Sacred Realm, where he meets Darunia, who is reawakened as the Sage of Fire. Darunia thanks Link for everything he has done for his people. The new Fire Sage then bestows the Fire Medallion upon Link. 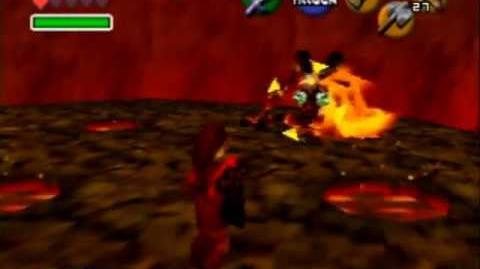 Though only implied by similarities in name and design, the character Volga was intended by developers to be the Hyrule Warriors incarnation of Volvagia. In his humanoid knight form, Volga wears a helmet that resembles Volvagia's head and in his dragon form he resembles a cross between Volvagia and a European dragon. Like Volvagia, Volga is an antagonistic dragon and a member of the Dark Forces. However unlike Volvagia, he was originally a dragon guardian of the Eldin Caves, who peacefully allowed the Gorons to mine there while he defended the caves alongside his army of loyal monsters known as Volga's Forces. However he is eventually brainwashed by Cia into becoming her general and is turned into a warrior who seeks to fight strong opponents.

In the Ocarina of Time manga, Volvagia plays a notably significant, and tragic, role. As a child, Link purchases the baby dragon in Hyrule Castle Town. At first the creature only seems to care for itself and food, until he saves Link from a Stalchild, who was about to do a sneak attack. After Volvagia does this and says "Link" over and over again, he and Link become friends. However, seven years later, the dragon is brainwashed by Ganondorf and becomes destructive, to the point where he will make Death Mountain erupt, destroying a large part of Hyrule. Link at first refuses to slay him, but Sheik tells him the only way to free him is to kill him. At first, Link tries to make him remember, but realizing it is futile, Link beheads him. Volvagia then returns to normal, shedding a single tear, while saying "Link" one last time before fading away.

Volvagia appears again in the Haunted Wasteland when Link faces illusions of past memories. Volvagia appears, beheaded and crying, saying "Link" again. This causes the Hero of Time to fall to his knees, until Sheik tells him it is an illusion.

Volvagia bears a striking resemblance to Barba, a dragon boss in The Adventure of Link, not only in appearance but in name, as well. Their names are identical in Japanese, and the name Barba is, in fact, re-translated into Volvagia in the re-release of The Adventure of Link on the Game Boy Advance as well as in The Legend of Zelda: Collector's Edition strategy guide.

Volvagia could be the corrupted deity of the Gorons, and this is why he is in their temple in the first place and the Gorons fear him. Valoo is also considered a deity as well as the Kokiri and Zoras having their own animal/plant-like deity it would make sense Volvagia was the Goron's deity before Ganon cursed him.

Many fans believe that Dragon Roost Island from The Wind Waker is Death Mountain post-Great Flood. This theory is furthered by particular carvings within Dragon Roost Cavern. The Cavern bears a striking resemblance to the Fire Temple, and many carvings found throughout the dungeon depict a snake-like dragon resembling Volvagia. Valoo is considered to be Volvagia's descendant.

Some fans believe that Stallord, the boss of the Arbiter's Grounds, is Volvagia's skeleton. The most notable similarity between the two is their similarly shaped skulls. Additionally, a remixed version of Volvagia's boss music plays during the second phase of the fight against Stallord. Stallord, however, is much larger than Volvagia, and Volvagia is defeated on Death Mountain, while Stallord is found in Gerudo Desert, making this theory unlikely; these two creatures may be of the same species, however. Additionally, Volvagia has three fingers on each hand, while Stallord has five fingers on each hand.

The boss chamber of the Earth Temple features a massive skeleton that greatly resembles Volvagia, and there is a prevalence of statues and carvings of Volvagia-esque dragons, possibly indicating the presence of Volvagia or its ancestors within the Eldin Volcano. The skeleton may in fact be hinted to be the remains of Volvagia, which is revived during the events of Ocarina of Time. This may be contradicted however, by a lack of Goron society within Eldin Volcano, making it more likely that this is an ancestor of Volvagia, rather than Volvagia itself.

Volvagia bears striking resemblance to the boss Botwoon. Like Volvagia, Botwoon is a large, red, serpentine creature. It swims about the room, entering and exiting holes scattered about, sometimes poking its head out of a hole to spit toxic spores at Samus. Like Volvagia, Botwoon's weak spot is its head, and once it is defeated, chunks of its body fall to the floor and explode in similar fashion to the Volvagia battle. Due to these similarities, it is possible that Volvagia was inspired by Botwoon.