Zeldapedia
Register
Don't have an account?
Sign In
Advertisement
in: The Legend of Zelda: Majora's Mask mini-bosses

This article is about the mini-boss from Majora's Mask. For the character from Link's Awakening, see Mamu.

"It's a Wart. Once you've gotten rid of the spheres that shield the main body, you can attack the eye."
— Tatl

Wart is a mini-boss from The Legend of Zelda: Majora's Mask. Wart is a creature whose body appears to be composed solely of a giant eye. For protection, it surrounds itself with a mass of gelatinous spheres. It appears in both the third dungeon, Great Bay Temple, where it guards the Ice Arrow, and the Secret Shrine.

Upon entering Wart's chamber, Link will find it to be seemingly empty. As soon as he looks upward, however, he discovers Wart clinging to the ceiling, surrounded by a copious amount of pink spheres. After sufficient eye contact, Wart descends and engages him in battle.

In order to defeat the creature, Link must attack its eye, which is surrounded by a protective layer of spheres. Link must first remove these by means of force. The spheres will dislodge if struck by any weapon in his arsenal; the Spin Attack, Hookshot, and Zora Link's boomerangs being particularly useful. Dislodged spheres will bounce around and can damage Link, but will eventually reattach to Wart if not destroyed. If Link pulls a sphere off with the Hookshot, it will be left right in front of him and can be easily dispatched with a sword strike before it can escape. It is not necessary for Link to destroy every last sphere; only so many as are required to get a clear shot at Wart's eye, which opens periodically to confirm Link's location.

After taking enough direct hits, Wart sheds all its remaining spheres and changes strategy. The detached spheres, which will not reattach themselves to Wart for the remainder of the battle, begin bouncing around, while Wart begins to skid randomly across the room in an attempt to collide with Link, turning and charging again after hitting a wall. At this time, Link can stand in a corner of the room in order to remain relatively safe while continuing to strike Wart's eye with any projectile-based weapons available. Wart's sensitive ocular can only take so much damage before being destroyed, at which point its entire body explodes.

Notably, Wart is particularly susceptible to bombs. While the bombs are somewhat difficult to time efficiently, the explosions can penetrate the spheres and hurt it as long as its eye remains open. The blasts are useful for finishing off large amounts of spheres as well. On the other hand, the blast may dislodge more spheres from Wart's body than Link can handle at a time. 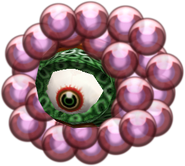