"Link, this is a beautiful lake full of pure, clear water. At the lake bottom there is a Water Temple used to worship the water spirits. The Zoras are guardians of the temple."
— Kaepora Gaebora

The Water Temple (水の神殿, Mizu no Shinden?) is the sixth dungeon in The Legend of Zelda: Ocarina of Time. The temple is where the Zora pay homage to the water spirits. The Water Temple is infamous among Zelda fans for its difficulty; however, the dungeon's difficulty level was drastically lowered for Master Quest and the 3DS remake.

At the unveiling of Ocarina of Time 3D at E3 2010, series creator Shigeru Miyamoto stated that he had been haunted by guilt for the last ten years due to the negative backlash against the dungeon's difficulty. As a result, measures were taken to ensure that the Water Temple can be more easily completed in the remake. These include an easier method of switching between the Kokiri and Iron Boots as well as three colored paths leading to the locations where Link can raise or lower the temple's water level.

The Water Temple is an underwater temple built by the Zora, utilized to pay homage to the water spirits. Its entrance is located at the bottom of Lake Hylia, at the base of the largest island of the lake. The temple is one of five temples in Hyrule. While Link was trapped within the Sacred Realm, Ganondorf, the King of Evil, froze Zora's Domain and cursed the water temple with Morpha to prevent the Sage of Water from awakening. Consequently, a majority of the Lake's water drained, leaving a barren pit. When Sheik rescued Princess Ruto from beneath the ice of Zora's Domain, she immediately headed to the Water Temple to restore it. After obtaining the Iron Boots and Zora Tunic, Link enters the Water Temple and ultimately confronts Morpha. After its defeat, Lake Hylia is restored and Princess Ruto awakens as the Sage of Water. Reluctantly putting their engagement on hold, Ruto gives Link the Water Medallion.

The Water Temple is located beneath the waters of Lake Hylia at the base of the lake's largest mainland. The Water Temple is effectively a maze of chambers on five floors, some only accessible when the water of the temple is at a certain level. Part of the challenge of this temple is being able to raise and lower the water level effectively. The temple's main treasure is the Longshot. The Water Temple's Sage is Princess Ruto and its warp song is the "Serenade of Water". The Water Temple has been called the hardest temple in the game since its water puzzles require the constant need of having to switch the Iron Boots in the equipment subscreen, raising and lowering the water level of the dungeon, an apparently haphazard placement of puzzles and rooms, and only being able to use the Hookshot and the Longshot while underwater. The mini-boss of the dungeon is the notorious Dark Link, a black shadow version of Link that mirrors his movement. The dungeon has a prominent theme of serpents or serpentine objects. Most pillars and ornaments have some sort of a snake-or- dragon-like design on them. The dungeon's basement even has a section consisting of a long tunnel shaped like a curled serpent, with rapids and Whirlpools swirling throughout. 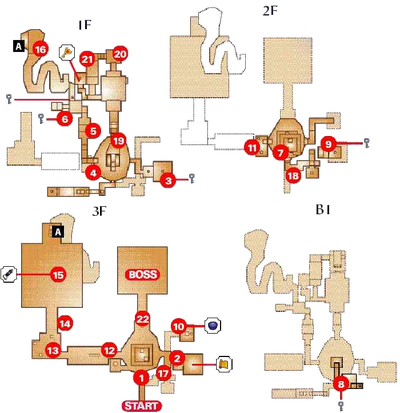 In the Master Quest re-releases, several changes have been made to the dungeon, including puzzles and the order in which rooms are visited. Din's Fire or Fire Arrows are necessary for many of the new puzzles in this dungeon. The Longshot is found quite early in this version of the dungeon. The main objective is to obtain the Boss Key which is found after beating Dark Link and progressing through the room with several Whirlpools. Strangely the Water Temple features very few enemies but does feature several powerful enemies such as Dodongos, Lizalfos, and Stalfos, and many of the rooms in this dungeon do not need to be visited in order to reach the boss. These rooms instead hold several Gold Skulltulas that can only be obtained after solving difficult puzzles. The error in the GameCube version has an extra small key and the second locked door is only in the 3DS version.

The Water Temple appears in Hyrule Warriors in Lake Hylia during the Ocarina of Time era. A Gate of Souls is hidden in the temple. Wizzro, under the guise of Princess Zelda, tries to defeat the heroes until the Mirror of Truth is used to reveal his true identity.

It is possible that the serpent-like statue found all over the Water Temple symbolizes the dungeon's patron deity or illustrated versions of the Water Spirits. This statue is never mentioned, but it is seen quite often throughout the temple. Snakes can also be seen several times in the Temple's architecture, and the boss, Morpha, loosely resembles a snake. Also, all of the other adult dungeons seem to have their own representations. It is possible that these serpents are the water spirits that the Zoras use the temple to pay homage to. Interestingly, Lanayru, a light spirit from The Legend of Zelda: Twilight Princess who can be found in Lake Hylia, resembles a snake, so Lanayru's design may be a subtle reference to these serpent statues if they have any significance.

Due to their similar structure, location, and main item, many believe that the Lakebed Temple from The Legend of Zelda: Twilight Princess and the Water Temple are one and the same.