"You got the whip! Tap the screen to give it a crack! Tap and hold objects to latch onto them and swing from them! Tap and hold certain flying objects to hitch a ride!"
— In-game description

The Whip (ムチ, Muchi?) is a recurring item in the Legend of Zelda series.

A bullwhip which bears the likeness of a snake, the Whip is acquired by beating a Snapper, enemies that commonly wield similar whips, in the Ocean Temple. The Whip can be used both as a weapon and to swing across chasms by latching onto suspended objects such as poles and birds carrying pieces of wood in their beaks, in a manner similar to the Grappling Hook. It can also be used to snatch and throw objects from enemies, such as shields from Zora Warriors and helmets from Helmet ChuChus. In addition to its use in dungeons, the Whip can be used in a Whip Race mini-game in Whittleton. If the whip is used on Princess Zelda in her Phantom form (excluding Wrecker), she will speed up.

The Whip is obtained in the Ancient Cistern after defeating the Stalmaster. It can be used to retrieve items, pull levers, and cut grass, as well as make enemies flinch. Bulb-Shaped Switches require its use to be activated. It can also be used to defeat weaker enemies, such as Aracha or Keese, and to latch onto the tails of Furnix in order to make them vulnerable to the Fatal Blow. Link can also use the Whip to obtain items such as the Monster Horn from Bokoblin Leaders & as well as Blue Bokoblins that carry them, as well as unearth Peahats. Link can use the Whip to reach switches and items behind iron bars. Link can use it to grab Pots and Bomb Flowers allowing Link to pick them up from a distance. As one point in the Ancient Cistern, Link use it to steal a Small Key from a Green Bokoblin Archer. The Whip has a glowing sphere of light at its end that can harm enemies weak to light such as Cursed Bokoblins. It is used by swinging the Wii Remote in the same movement.

The Whip from Skyward Sword appears as two badges (Whip I and Whip II) that can be crafted at the Bazaar's Badge Market. Each badge increases the duration of the Hookshot's Clawshot power-up.

The Spirit Tracks incarnation of the Whip bears a striking resemblance to the Rope Snake, a character/item from another Nintendo game, Mother 3, in terms of both appearance and abilities, so it is possible that the Rope Snake was the Whip's inspiration. The Rope Snake also appears as part of one of Lucas's taunts in Super Smash Bros. Brawl.

The end of the Whip from Skyward Sword shares some similarities (glow, color, and sound effects) with the technology found in the timeshifted Lanayru Desert. One possibility is that the Whip is a surviving piece of technology from that time period, similar to the Beetle that Link finds in Skyview Temple, which Link later learns is a ancient machine from an Ancient Robot he rescues from some Technoblins in Lanayru Desert and is later upgraded by said Robot into the Hook Beetle. It should also be noted that unlike the Hook Beetle, the Whip cannot be upgraded by Gondo, potentially due to it being far too advanced to upgrade with the technology that exists during the Era of Skyloft. Given that the Ancient Cistern houses Farore's Flame Chamber, it likely that it was left there by the Goddess Hylia (and/or Faron) to aid her chosen hero in his quest to reach Farore's Flame. 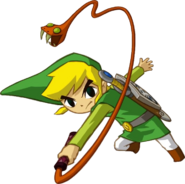 Artwork of Link using the Whip from Spirit Tracks

Artwork of Link using the Whip from Skyward Sword