), the Twisted Wizard (暗黒魔術師, Ankoku majutsu-shi?, Magician of Darkness), is an antagonist from Hyrule Warriors.

For centuries, Wizzro was a ring worn by many different owners who practiced dark magic. The ring absorbed the various wearers' power, growing more powerful as time passed. Eventually, Cia used her sorcery to transform the ring into a sentient being, Wizzro.

Due to being a spirit born from a ring infused with dark magic, Wizzro is an evil being who loves causing destruction and misery. As a result, Wizzro embraces evil and has no sense of honor. Wizzro is willing to use any tactic, no matter how dirty or underhanded it may be, such as setting the Great Deku Tree on fire upon finding out that it serves as a Hylian base. Befitting his twisted personality, he enjoys manipulating his foes via the use of diversions, sneak attacks, or using his shapeshifting powers to manipulate and psychologically attack his foes. He is also a sadist, as he enjoys watching his enemies suffer and die.

Due to his evil nature and knowledge gained from the various magic users that wore him over the years, Wizzro is able to sense evil traits in others, as shown when he sensed that Zant's greed would make him far easier for the Dark Forces to manipulate and control.

Though Wizzro acts as a subordinate to Cia, he has a tendency to follow those in power, and will betray his allies when it suits him. He is willing to try and take power for himself, such as when he attempts to usurp control over Volga's Forces by betraying Cia, though he is defeated and brainwashed into serving as her loyal general alongside Volga. Though he works well with Volga, he does not hide his disdain for the Dragon Knight who, unlike Wizzro, is loyal and honorable. Having been sealed in his ring form for many years before meeting Cia, Wizzro despises being turned back into a ring. As a result, being turned into a ring is a form of punishment for Wizzro.

Even after being brainwashed by Cia, Wizzro ultimately betrays her in order to serve the Demon King Ganondorf, whose power he came to admire.

Wizzro was awakened by Cia inside the Eldin Caves, where he joined her willingly. Cia was suspicious of his motives, however, as he joined too willingly. Her suspicions end up confirmed when Wizzro decides to aid one of the King Dodongos used by Volga's forces to attack Cia and Hyrule, forcing her to fight and defeat Wizzro. Afterwards, she places Wizzro and Volga (whom she had intended to recruit in the first place) under her dark magic, not wanting their free will to prove troublesome to her.

Wizzro commands the force of monsters Cia sends to attack Hyrule Castle in the beginning of the game. Following Volga's retreat and the awakening of Link's Triforce of Courage, the dark wizard summons King Dodongo to distract the Hyrulean Forces while he abducts Princess Zelda. Unbeknownst to either side, Zelda slips away in the confusion, disguising herself as Sheik.

Wizzro returns to the Eldin Caves, trying to stop Impa and Link's forces from reaching Faron Woods. He personally joins the battle when the Hylians send a pair of Bombchus to clear the path to the exit, but he is defeated and forced to retreat to his base in Faron Woods. When the Hyrulean Army, now merged with Lana's troops, comes to Wizzro's lair in Faron Woods, the dark entity flees once again, leaving Gohma to attack the heroes.

When Cia opens the Gate of Souls, Wizzro travels to the Era of the Hero of Time. Disguising himself as Zelda, he goes to Death Mountain and incites the Goron leader Darunia to violence against the Zora people. By the time Impa and Sheik bring Darunia to his senses, Wizzro has taken over the Water Temple in Lake Hylia, forcing the Gorons and Hylians to enlist the aid of Princess Ruto to open the way to "Zelda's" base. Wizzro uses his disguise to lower the Hylian forces' morale, though Sheik and Impa manage to dissuade their doubts. When his main base is breached, Wizzro summons the local version of King Dodongo to attack Darunia and Ruto's forces, leaving Impa and Sheik to battle him. After defeating the evil sorcerer, Sheik uses the Mirror of Truth to break Wizzro's disguise and force him to retreat again; in the process, the mysterious Sheikah is also revealed to be the true Princess Zelda.

Wizzro makes one final attempt to stop the Hyrulean Army at the Temple of the Sacred Sword, the resting place of the Master Sword. Using his dark power, the evil wizard takes control of the ghostly soldiers defending the temple, leading them against Zelda's army in the guise of Lana. When Link defeats the fake to break its control over the Ghost Soldiers, Wizzro flees to the depths of the temple, allowing Link to claim the Master Sword. He makes a final attempt to kill the hero as he draws the mystical blade, but the sacred power of the barrier around the Sacred Pedestal Chamber proves too much for him, forcing him to retreat to the other side of the temple and summon reinforcements. After being defeated before his army can slay Princess Zelda, Wizzro directs the Hyrulean Army to the Temple of Souls, warning them that his master Cia will not be pleased by his defeat.

In "Darkness Falls",Wizzro initially fights as a member of Cia's Dark Forces against Ganondorf's Forces. After witnessing Ganondorf's power and strength, however, Wizzro quickly defects from the Dark Forces and sides with Ganondorf. He is defeated and resealed back in his ring by Cia as punishment for his betrayal, and she replaces Wizzro and his treacherous forces with Dark Links. 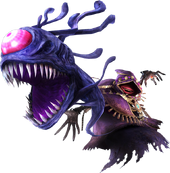 Wizzro mainly fights with dark magic, firing barrages of bullet-like orbs or giant beams. He can also summon various monsters, such as creatures resembling Moa, Floormaster, and Wallmaster. In The Armies of Ruin, Impa is amazed that Wizzro is able to summon a beast as large as King Dodongo to the battlefield. In The Water Temple, Wizzro (as Fake Zelda) is able to summon the King Dodongo of the Era of the Hero of Time to Lake Hylia.

As a malevolent evil entity, Wizzro is vulnerable to both the barrier that surrounds the Sacred Grove inside the Temple of the Sacred Sword as well as the Master Sword's power to repel evil.

He is also shown to be a capable shapeshifter, able to transform into a pale doppelgänger of both Lana and Princess Zelda. Having absorbed the magic power of the many dark magic users over centuries, Wizzro is also capable of mimicking Zelda and Lana's magical abilities. Presumably as an extension of his shapeshifting abilities, he is capable of affecting the morale of his enemies and can brainwash various soldiers. Wizzro's transformations can be dispelled by the power of the Lens of Truth.

Wizzro's original form is a ring that absorbs dark magic from its wearers. In The Dragon of the Caves, Wizzro is sealed in this form when he is found and transformed by Cia. Wizzro himself despises the form. The ring appears as his Gold Material drop.

Dark Wizzro is a shadowy doppelgänger of Wizzro that appears as an enemy in Adventure Mode. It uses the same moveset and drops the same Materials as Wizzro.

Wizzro can be seen as an amalgamation of a Wizzrobe and the Ghost Hunter. Interestingly, Wizzro often uses Big Poes, Spirit of the Caves, and Icy Big Poes as underlings, likely a reference to the Ghost Hunter's association with Poes in both Ocarina of Time and Majora's Mask. 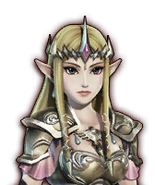 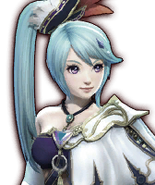 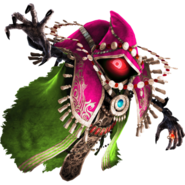 Wizzro summoning a Wallmaster-like hand during his Focus Spirit attack