Zeldapedia
Register
Don't have an account?
Sign In
Advertisement
in: Temples, The Legend of Zelda: Majora's Mask dungeons
English

"I was trying to find out about the poison in the swamp, so I went to Woodfall Temple above the waterfall. But the temple had become a monster's lair, and the princess was captured by the monster..."
— Imprisoned Monkey

Woodfall Temple is the first dungeon in The Legend of Zelda: Majora's Mask. It is located at the center of Woodfall, the source of water in the swamp region. In order to enter the temple, Link must play the "Sonata of Awakening" on his Pipes of Awakening while standing on a sacred symbol of the Deku in eastern Woodfall.

Upon arriving in the Southern Swamp, Link finds that the swamp water has been poisoned. He encounters some monkeys outside the entrance to the Woods of Mystery, who tell him about a brother of theirs who has been taken captive by the Deku Royal Family residing in the Deku Palace, mistakenly arrested as the kidnapper of the Deku Princess. Link sneaks into the Deku Palace and finds his way into the monkey's cell. The monkey tells Link that he and the Deku Princess traveled to Woodfall to ascertain the reason behind the poisoned swamp water. While in Woodfall Temple, the Deku Princess was taken captive by Odolwa, and the monkey was captured shortly thereafter. To help him enter Woodfall Temple, the monkey teaches Link the "Sonata of Awakening" on the pipes used in his Deku form. Link is discovered and kicked out of the Palace, while the monkey is tortured by the Royal Deku Court.

Link makes his way to the site of Woodfall Temple and plays the "Sonata of Awakening", causing the temple to rise from the swamp. While traversing the temple, he finds a large, wooden, flower-shaped structure. He lights the torch atop it, causing it to rise, rotate, and cleanse the poisoned water within the temple. Using the activated structure, Link crosses the proceeds further into the temple, eventually encountering Odolwa. After a fierce battle, Odolwa is defeated, and Link obtains his remains. He steps into a pool of light that transports him to a bright, dreamlike realm. Here, a mighty creature known as a giant has been freed from the seal on him, thanks to the defeat of Odolwa. The giant speaks to Link, and tells him to rescue his three friends in the other temples. In order to stop the Skull Kid, the Giant teaches Link the "Oath to Order"; a song that will summon them in the time of need. With the defeat of Odolwa, the poison is cleansed from the rest of the swamp. Link is then transported to a new area of the temple, which holds the Deku Princess's prison cell. Link carries her in a bottle and returns her to the Deku Palace in time to rescue the falsely accused monkey. 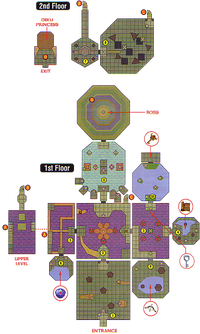 This Woodfall Temple consists of rooms filled with poisonous water and dark rooms that require Torches to be lit. Many of the puzzles and challenges require travel via Deku Flowers while in Deku form. In front of the entrance of the first room is the portal to the boss, which can be accessed on successive visits to the dungeon.

In this dungeon, Link obtains the Hero's Bow after defeating a Dinolfos mini-boss. Link can collect all fifteen Stray Fairies in the dungeon and return them to the Great Fairy Fountain in Woodfall, for which he is rewarded with the upgraded Spin Attack. In the 3DS remake, he obtains the Magic Meter upgrade instead. The boss of this Temple is the Masked Jungle Warrior Odolwa. After his defeat, Link receives a full Heart Container and Odolwa's remains, freeing the first of the Four Giants.