"The land of Termina faced imminent destruction from a maniacal masked figure and a furious moon, but a young hero named Link appeared just in time to summon the four giants and set things right. Link originally found himself in Termina while in search of someone dear to him. The Skull Kid stole the Ocarina of Time from him and set the events of Majora's Mask in motion. Despite his youth, Link is a formidable warrior, possessing mastery of a sword. He also comes equipped with the Fierce Deity's Mask, an object that allows him to turn into a powerful spirit."
— Young Link, A Determined Youth Historical Entry Tutorial Bio

Young Link is one of two DLC characters from the Majora's Mask Pack DLC and uses Masks as his weapon moveset. Young Link wields a slightly larger version of the Kokiri Sword from Majora's Mask. Instead of Link's traditional Sword & Shield fighting style, Young Link wields the Kokiri Sword two-handed and does not use a shield. He also carries two masks: the Keaton Mask and the Fierce Deity's Mask. When not in use, he wears the Keaton Mask on top of his head, while he wears the Fierce Deity's Mask on his belt. By donning the Fierce Deity's Mask, Link gains the power of a god and wields the powerful Fierce Deity Sword. Young Link is a silent protagonist who lets his fairy partner, Proxi, speak for him. Like most of the game's DLC characters, Young Link does not play a role in the games' main story.

Dark Young Link is the shadowy doppelgänger of Young Link and an enemy that appears in Adventure Mode. He uses the same moveset and drops the same materials as Young Link. He can transform into a dark version of the Fierce Deity, potentially making him one of the most powerful and dangerous incarnations of Dark Link. 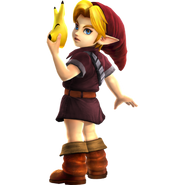