"Legend tells of two worlds that intersect. In A Link Between Worlds, the hero traversed these mirrored worlds to protect the sacred Triforce. He uncovered a sorcerer's plot to revive the Demon King. This sorcerer tirelessly sought things of true beauty across both worlds. With the unique power to turn people into paintings, he did just that to the seven sages' descendants, capturing them one by one. In battle he hides within a beautiful picture frame while his illusory attacks blindside enemies. He can summon a massive spear from the frame to pierce his enemies' defenses and to wipe the field clean."
— Yuga, Sorcerer of Lorule Historical Entry Tutorial Bio

Yuga is a playable version of Yuga from the Hyrule Warriors series. He is based on the Lorulean Sorcerer who sought to steal Hyrule's Triforce in The Legend of Zelda: A Link Between Worlds.

"Aiming your weapon at me shows you have no sense of danger... An ugly feature!"
— Yuga

Yuga is largely focused on physical perfection and beauty, often being disgusted by apparent imperfections and ugliness. He is also shown to be very arrogant, as evidenced by his interactions with Link in A Link Between Worlds and battles quotes in the Hyrule Warriors series.

Unlike Ganon, Yuga's pursuit of power is driven by his desire to essentially become a god and recreate the world of Lorule (and possibly Hyrule) as he sees fit; this is unlike Ganon, who desires to take over the Kingdom of Hyrule out of a lust for power. 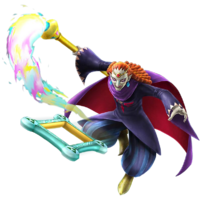 As expected of someone of his physique, Yuga relies mostly on his great feats of magic as opposed to brute strength. He can merge with walls as a painting, create Magic Circles, create pillars of fire on the walls, and summon lightning from his staff.

Yuga drops the same materials as Ganondorf, given that Yuga is the Lorulean counterpart of Ganondorf.