"As the portal to the Era of Twilight opened, the land was once more subjected to the fearsome Usurper King, the Twili who brought both the Twilight Realm and Hyrule to their knees. Zant earned his reputation and title when he stole the throne from Midna, the Twilight Princess. Immediately after doing so, he cursed her and set about invading the land of Hyrule. While Zant is usually able to keep his regal composure, all of his grace and calmness melts away when he become flustered. This can make him very dangerous indeed."
— Zant, Usurper King Historical Entry Tutorial Bio

) is a playable character and an antagonist in Hyrule Warriors and Hyrule Warriors Legends. He is the Usurper King of the Twilight Realm who invaded Hyrule in the Era of Twilight.

In another Era, different than the Era of Twilight, the soul of the Demon King Ganondorf had been split into four fragments by another incarnation of the Hero. One of these fragments was placed in the Throne Room of the Palace of Twilight within the Era of Twilight, where it remained sealed until the Demon King managed to corrupt the Guardian of Time, who watched over the Triforce, transforming her into the Dark Sorceress Cia. As Ganondorf had done with Zant, the Demon King manipulated her into freeing him from his imprisonment using the power of the Triforce to warp time and space, causing the Era of Twilight to appear in Hyrule. Like Zant before her, Cia placed a curse on Twili Midna to weaken her, forcing her to don the Fused Shadow once more. As a result of the warping of time and space, Zant was resurrected as well and, seeking to reclaim the throne of the Twilight Realm, led his forces in a battle against Midna and her allies.

As Midna and Zant's Forces fight within the Palace of Twilight, Cia and her Dark Forces arrive to seize control of the Gate of Souls that had opened up in the Palace's throne room. Seeing that Zant's greed would make him easier to manipulate, her general Wizzro suggests defeating Midna's Forces to aid Zant. After managing to defeat Midna, the Dark Forces try to convince Zant to join them; however, he refuses to serve Cia, unaware of her connection to Ganondorf. Cia is forced to defeat Zant and his army to convince him to yield. Seeing her power as superior to his own, Zant joins her cause and guards the Gate of Souls within the Twilight Realm.

Eventually, he is confronted by the Hyrulean Forces led by Lana, along with her allies from the Era of Twilight, Midna and Agitha. He summons the Twilit Dragon Argorok to defeat them; however, they manage to defeat it with help of the Great Fairy that resides in the Fairy Fountain located in the Twilight Realm. With little recourse, Zant is forced to confront Midna and Lana himself, only to be defeated once again. Lana uses her power to close the Gate of Souls.

Ganondorf eventually manages to regain his physical form, free himself from the seal, and set about rebuilding his army to obtain the Triforce he long sought after. Reviving Zant and Demon Lord Ghirahim from the Era of Skyloft, Ganondorf demands they follow him or face death once more. Eager to serve his god again, Zant is quick to join his master's cause and becomes one of the Demon King's new generals. After defeating the Monster Forces controlling Gerudo Desert, Zant joins his master in his quest to reclaim the Triforce of Power, which had fallen into Lana's possession following Cia's defeat.

March of the Demon King

Battle of the Triforce 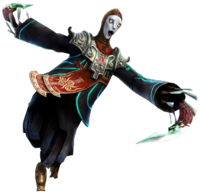 Though his power pales in comparison to Twili Midna, the True Ruler of Twilight, Zant is a dangerous foe and not to be underestimated. His connection to Ganondorf renders him practically immortal, as he can be revived by his master if he is killed. Like his master, Zant has many minions under his command and, like Midna, can summon his minions to aid him in battle. As a member of the Twili race, Zant uses Twilight magic and creates Twilight Portals. He can also summon objects such as totems from the Forest Temple to use as improvised weapons.

During certain combos and attacks, Zant can enlarge himself; in this form, he is physically stronger and uses his size to his advantage.

When encountered as an enemy, Zant has his arms outstretched and raised before screeching as he contorts himself. He then proceeds to quickly stand back up, before giving three hops in an apparent tantrum before flying forward, and then spinning around before striking a pose. This all referenced his actions during his rant towards Midna and Link prior to his battle with them in Twilight Princess. After spinning, he then has his scimitars and mask appear.

In his victory animation, Zant, while moaning, leans back while barely standing with his arms outstretched, and then yells out as his helmet reappears before teleporting away. Like above, this also references his actions before fighting Link and Midna, more specifically his mention of his encounter with a god.

Fake Zant is a body double of Zant created to distract the Hyrulean Forces in Enduring Resolve while the real Zant remains hidden, observing the battle from safety. It resembles a pale version of Zant. Fake Zant uses the same moveset and drops the same materials as the real Zant. 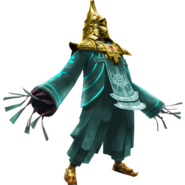 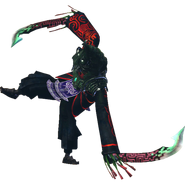 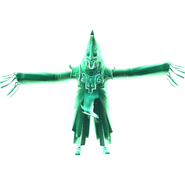 Zant attacking Midna from atop his totem